You knew it was inevitable that all those Christian righters who were praying that Donald Trump would be elected would claim that God answered their prayers. They do not disappoint. Jim Bakker calls it “the greatest miracle I’ve ever seen.”

Once things calmed down a bit, Bakker stated that Trump’s election was “the greatest miracle I have ever seen.”

No Jim, the greatest miracle is that there are enough incredibly gullible people out there to still be sending you money and buying your shitty buckets of food.

Sam Rohrer of the American Pastors Network says the only possible conclusion is that God put Trump in office:

Appearing on “Focus Today” on Friday, Sam Rohrer of the American Pastors Network declared that Donald Trump’s election last Tuesday was “an answer to prayer” and an unmistakable work of God.

“We asked God that if you choose to have mercy on us as a nation,” Rohrer said, “and if you choose, in your providence, to overrule the manipulations of man, make a win so clear that even the opponents would have to say somebody like God or God did it. And I believe that that’s exactly what happened.”

I’d really love to hear one of these crackpots explain exactly how God did it. Did he use his magic powers to change people’s minds so they voted for Trump when they otherwise would have voted for Clinton? If so, what happens to all that free will nonsense that they use to excuse away terrible human behavior and sin? Leading up to this, they were all preaching that God would only save us if the country turned back to him and prostrated ourselves before him, but what would that possibly mean if he overruled our free will and made us do it? The whole idea is incoherent, but when did that ever stop con men? 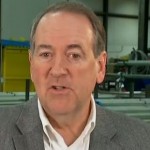 November 15, 2016
Huckabee: Trump Could Be One of Our Greatest Presidents
Next Post

November 15, 2016 Look, More Public Officials Making Racist Comments About Michelle Obama
Recent Comments
0 | Leave a Comment
Browse Our Archives
get the latest from
Nonreligious
Sign up for our newsletter
POPULAR AT PATHEOS Nonreligious
1