It’s time for another installment of Everyone I Disagree With is Possessed by Demons, starring con man Jim Bakker and con woman Billye Brim. They both agreed that the women’s marches the day after the inauguration were “driven by demons” and full of an “evil spirit.”

Bakker described Trump’s inauguration in glowing terms, saying that he felt “the presence of God” in Washington. But he and his guest, evangelist Billye Brim, railed against the subsequent Women’s March on Washington, which Brim said was “driven by demons.”

Upon seeing the Women’s March, Bakker said, he suddenly felt “the most evil spirit I’ve ever felt.”

Bakker was particularly offended that march participants used “dirty” and “filthy” words like “nasty” and “pussy”—words that the protesters pulled directly from the now-president, including from the infamous tape of him boasting about sexually assaulting women.

Brim said that the Women’s March was dominated by “the kingdom of darkness” and urged residents of Washington to “control those demons that were in those women.”

Oh yes, we must control those demons. I’ve always found that demons are easily controlled, by virtue of the fact that they don’t exist (except perhaps Celine Dion).

February 2, 2017
Quebec Mosque Shooting a False Flag. Because of Course It Is.
Next Post 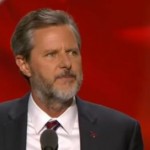 February 2, 2017 Falwell Jr. to Lead Trump Commission on Higher Education
Recent Comments
0 | Leave a Comment
"Donald Rumsfeld is gone. I wish you were here to weigh in on that, Ed. ..."
Silverwynde Saying Goodbye for the Last Time
"Death is nothing to fear although the process can be very scary. Sleep well."
MacNutz2 . Saying Goodbye for the Last Time
"shows your ignorance. Hanks WAS a major Satanic pedophile leader, he WAS one of the ..."
DJTNo1Fan Crokin: Tom Hanks to Be Arrested ..."
"you are correct! All these people are really ignorant or stupid."
DJTNo1Fan Crokin: Tom Hanks to Be Arrested ..."
Browse Our Archives
get the latest from
Nonreligious
Sign up for our newsletter
POPULAR AT PATHEOS Nonreligious
1

QAnon Lies, and People Die
Roll to Disbelieve
Related posts from Dispatches From the Culture Wars