Barton the Liar on ‘Trump the Theocrat’

Barton the Liar on ‘Trump the Theocrat’ March 1, 2017 Ed Brayton

Professional liar David Barton has a Worldnetdaily column in which he claims that the left is now calling Donald Trump a theocrat. Missing from the column is even a single quote from a single person on the left making that claim.

In 1945, George Orwell penned “Animal Farm.” One of his characters was Squealer the pig, who arbitrarily redefined words so that they would mean what he wanted. As Orwell explained about Squealer, “he could turn black into white” as part of his attempt to get the other animals to accept his message. It appears that secular progressives are the modern Squealer.

According to them, Donald Trump has now shown us who he really is: a theocrat. Never mind that leading up to the election, we were all fed a steady diet of how irreligious he was. That doesn’t matter anymore. Now he’s a theocrat!

Ironically, they don’t even call the pope a theocrat, and especially not their Shariah supremacist friends seeking to install a global caliphate. The term “theocrat!” is so repulsive that it is reserved solely for Donald Trump and those who support him.

I understand that it might be difficult for secular progressives to know the meaning of a word as simple as “theocracy.” Most of them probably went first to public school and then attended an “elite” academic college afterward, and study after study affirms that most of those who attend such institutions no longer receive even a rudimentary knowledge of basic historical facts (and they certainly don’t get much logic or common sense).

It’s really sad to see sarcasm wasted in defense of such stupidity. Yes David, maybe everyone should go to a great “university” like Oral Roberts. Heck, they can even be on the basketball team, as you have repeatedly lied and said you did when you had nothing remotely to do with the ORU basketball team. Maybe that’s where Barton got his higher education in the art of lying, from a “university” founded by a con man who claimed to see a 900-foot Jesus floating over Tulsa, Oklahoma. Seems appropriate.

Now here’s my favorite part. Someone in the comments pointed out that Barton doesn’t actually present a single person calling Trump a theocrat. This was the first response to that comment:

I think that David Barton was just making an excellent point about the communists changing the language to suit their needs. He was not accusing anyone of calling Trump a theocrat. Therefore the question mark in the title.

Don’t be so picky.

Is there really any point in trying to argue with someone who could make that kind of statement? 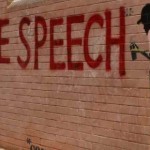 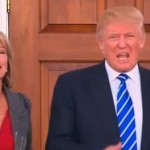 March 1, 2017 DeVos' Bizarre Claim About Historically Black Colleges
Recent Comments
0 | Leave a Comment
Browse Our Archives
get the latest from
Nonreligious
Sign up for our newsletter
POPULAR AT PATHEOS Nonreligious
1