“We should be moving to the top of these mountains,” Wallnau said. “Christians are called to go into proximity to the gates of hell. That’s why they’re showing up in government. They should be showing up in journalism.”

To remedy this, Wallnau launched “The 7M Underground,” through which he plans on “working with producers, directors, attorneys, politicians, economists, [and] the Trump transition team” to place Christians in positions of authority.

“I’m working with believers that I call ninja sheep—those are believers that are actual believers but have to maintain discretion with their public profile,” he said. “And what we want to do is we want to reinstall a culture that honors God and that revives again a morality that’s essential to the survival of America as a Christian-influenced nation. So the underground is where we meet and we basically have now mobilized nationwide believers to intercede pray and be informed and then show up at the decisive flashpoints in culture where there can be a presence behind what Trump’s assignment is. So it’s pretty exciting.”

I suspect he’s mostly full of manure here, but I think we have to take it at face value anyway. 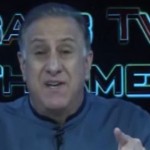