During his address to Congress, Donald Trump cited a study by the National Academy of Sciences that allegedly showed that illegal immigration cost us billions of dollars a year. Francine Blau, lead author of that study, and Gretchen Donehower, a consultant on the study, says he lied about its conclusions. Here’s what Trump said:

The current, outdated system depresses wages for our poorest workers, and puts great pressure on taxpayers. Nations around the world, like Canada, Australia and many others — have a merit-based immigration system. It is a basic principle that those seeking to enter a country ought to be able to support themselves financially. Yet, in America, we do not enforce this rule, straining the very public resources that our poorest citizens rely upon. According to the National Academy of Sciences, our current immigration system costs America’s taxpayers many billions of dollars a year.”

Blau and Donehower responded with a long and detailed explanation of the study’s findings, which did not say what Trump claimed at all.

As the chair of the panel of scientists convened to write that report and one of the consultants who analyzed the effect of immigration on government budgets, we can state unequivocally that this was not our conclusion. Our report looked at the evidence from all sides and found that the economic and fiscal consequences of immigration are generally positive, or at least not likely to be negative. How, then, can the report be used to argue the opposite?

It’s possible precisely because we did examine the evidence from all sides. President Trump took advantage of a rhetorical vulnerability inherent in scientific evaluation: Because we presented evidence from an array of sources, someone who seeks to support a particular position can dig out findings or statistics to support the conclusion he or she prefers. President Trump, or his speechwriters, cherry-picked some of our results related to government budgets and ignored the overall positive impact that immigrants have on our economy (a positive impact that in turn supports the health of public finances).

Specifically on the subject of illegal immigration suppressing wages for unskilled American workers:

What about impacts on wages and employment? Over all, when measured over a period of 10 years or more, there is little evidence of a negative effect of immigration on the wages or employment of natives overall. When there was evidence of negative impacts, they were mostly visited upon prior immigrants and those natives with the lowest levels of skills and education — those lacking a high school degree. This is likely the section of the report referred to in the president’s speech, but even here the research produced a range of evidence and was far from unanimous in finding negative effects.

The panel looked across the relevant studies at estimates of what would happen to the wages of the least educated native-born Americans if immigration raised the total supply of labor in the US by 1 percent. Those studies came to a range of conclusions —from a decrease in the wages of these workers of 1.7 percent to no effect to a modestly positive increase of 0.1 percent. What’s more, while not an issue examined directly by our panel, most research suggests that the primary source of worsening wage outcomes for the lowest skilled among US workers is technological change, not immigration.

Moreover, we found virtually no indication that immigration adversely affected the wages or employment of native-born, high school–educated workers, the people whose economic problems are sometimes pointed to as a reason for curbing immigration — and whose economic angst played a part in fueling Trump’s successful presidential bid. Again, the major reason for negative trends for this group appears to be technological change. A more surefire strategy to raise wages of less skilled workers than restricting immigration is to raise their skill levels by investing more in education and training.

They also note the many positive effects of immigration, especially at a time when the Baby Boomers are retiring and the succeeding generation is significantly smaller, with all of the negative consequences for programs like Social Security and Medicare, not to mention a smaller tax base in general:

Our report also found that immigration produced many concrete economic benefits. A strongly supported finding of the report is that immigration is integral to the nation’s economic growth. The inflow of labor supplied by immigrants has helped the United States avoid the problems of other economies, such as Japan’s, that have stagnated as a result of unfavorable demographics — particularly the effects of an aging workforce and reduced consumption of housing and other durable goods by older residents.

In addition, the infusion of human capital by high-skilled immigrants has boosted the nation’s capacity for innovation, entrepreneurship, and technological change. Research suggests, for example, that immigrants to the US have substantially raised the number of patents granted per capita, which ultimately contributes to productivity growth. The prospects for long-run growth in the United States would be considerably dimmed without the contributions of high-skilled immigrants.

Moreover, in shutting the doors to lower-skilled immigrants, the nation would lose their many economic contributions, such as their role in making goods and services like child care, house cleaning and repair, food preparation, and construction more available and affordable.

It’s a very long article, but goes into great detail on all of the ways the study’s conclusions flatly contradicted what Trump said. So he lied. Or his speechwriters did, but what’s the difference? It once again shows that neither Trump nor his advisers care even one iota about whether the things he says are true or not. 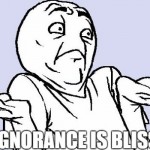 March 19, 2017 The Staggering Ignorance of Trump Supporters
Recent Comments
0 | Leave a Comment
"OnlySky is now live: https://onlysky.media/I am adding Ed to my OnlySky authors shortcuts folder so ..."
Thomas Fitzpatrick Saying Goodbye for the Last Time
"Hi ,for anyone wanting to follow the friendly atheist on Onlysky, it will go live ..."
david coxill Saying Goodbye for the Last Time
"Oh yes.. The privilege of being called names by people who have zero understanding what ..."
Standingbear Gallups: Satan Has Convinced Christians They ..."
"I wouldn't mind idiots saying "Black Lives Matter" IF They Meant it.Clearly that is not ..."
Standingbear Gallups: Satan Has Convinced Christians They ..."
Browse Our Archives
get the latest from
Nonreligious
Sign up for our newsletter
POPULAR AT PATHEOS Nonreligious
1