David Roberts has a nearly book-length article about Donald Trump and the rise of tribal epistemology, a term I hadn’t heard before but perfectly describes things that I have been writing about and criticizing for more than a decade. And Trump is sort of the culmination of it all. 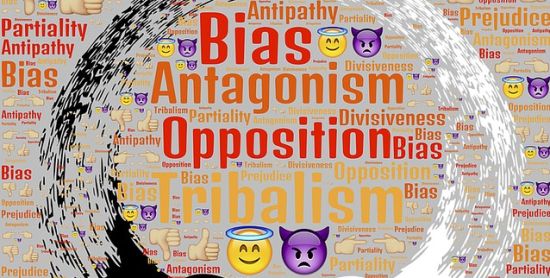 He starts by discussing Rush Limbaugh and his highly dishonest attacks on climate science and scientists, during which he offers this telling quote from him:

He’s projecting all the way to the moon and back, of course (though don’t get too smug, liberals; we’re hardly innocent of such things ourselves. I’ll get to that later). Limbaugh and the entire right wing talk show ecosphere, along with some of Fox News (Hannity, O’Reilly, Fox and Friends, Tucker Carlson), practically live in an alternate reality. In the right wing mediasphere, global warming is a hoax (perpetrated by the Chinese, according to Trump); the founding fathers created an explicitly Christian nation; whites are the real victims of racism today; sexism no longer exists in any real way; immigrants come here to spread disease, destroy America and rape our white women (while listening to jazz and smoking the demon weed, one presumes); every Muslim is a threat to kill us all; and now, suddenly, Vladimir Putin is our friend. It’s a bizarro world that could not be further from the reality-based community.

What they have developed is a very deep strain of what I have long called virulent ignorance. It isn’t just that they don’t know the basic facts about virtually any subject, it’s that they have imbibed a vast collection of falsehoods and myths that make them think they understand those issues when they don’t. Reality has been replaced with pseudo-facts and truthiness, protected by a huge range of easy dismissals and post-hoc rationalizations that prevent actual knowledge from breaking through the haze of virulent ignorance in which they live. And Trump is the living embodiment of that:

In Limbaugh’s view, the core institutions and norms of American democracy have been irredeemably corrupted by an alien enemy. Their claims to transpartisan authority — authority that applies equally to all political factions and parties — are fraudulent. There are no transpartisan authorities; there is only zero-sum competition between tribes, the left and right. Two universes.

One obvious implication of this view is that only one’s own tribe can be trusted. (Who wants to trust a “universe of lies”?)

Over time, this leads to what you might call tribal epistemology: Information is evaluated based not on conformity to common standards of evidence or correspondence to a common understanding of the world, but on whether it supports the tribe’s values and goals and is vouchsafed by tribal leaders. “Good for our side” and “true” begin to blur into one.

Now tribal epistemology has found its way to the White House…

For the media, Trump represents a great challenge but also a great opportunity. He will make the work of journalism more difficult (calling only on sycophantic outlets during press conferences is likely just the beginning). But by putting the integrity of the press in the spotlight, he might just force a long-overdue reckoning with the role of media in democratic politics.

The US political media underestimated Trump’s potential for many reasons. Prominent among them was its longstanding refusal to grapple with the deepening asymmetry in American politics — the rejection, by a large swath of the right, of the core institutions and norms that shape US public life.

Under Trump, that asymmetry has become glaring and inescapable. And it is bumping up against the foundations upon which all independent journalism stands.

It is time for journalism to take a side — to fight, not for any political party, but for the conditions that make its own existence possible.

I said many times last year that I had never seen an election where the psychology of one side was on display so vividly. If you haven’t read Robert Altemeyer’s work on the Right Wing Authoritarian (RWA) personality and how it influences political positions, you really should do so. It’s available free here. I would also strongly recommend reading Richard Hofstadter’s classic essay The Paranoid Style in American Politics, published just as the John Birch Society, the precursor to today’s Tea Party, was born and gaining influence. Hofstadter’s Anti-Intellectualism in American Life is also important if you want to understand what’s happening today, despite being written more than half a century ago.

What Altemeyer’s work and much subsequent research shows is that the conservative mindset reflects a specific type of personality, a set of traits that show up very consistently among those who identify as conservatives: a very high degree of loyalty to their tribe (whether that be white people, Christians, Americans, or some other demarcation); fear and distrust of outsiders (thus their strong anti-immigrant stance); a high degree of revulsion and disgust at impurity (whether medical or moral); a high affinity for tradition. And more. Liberals, on the other hand, tend to be more open to new experiences (tasting new foods, attending or observing the traditions and rituals of other tribes, etc), less fearful of outsiders, and better equipped to handle the tribal diversity that inevitably comes with large, open societies.

Trump’s 2016 campaign was, unwittingly and unintentionally in my view, practically a master class in how to appeal to and manipulate the right-wing personality. What he sold them more than anything else was fear. Mexico is sending us their rapists and drug dealers; Muslims are such a threat that we need to ban them from coming to this country completely; violent crime is rampant and you and your family are at great risk from it; Christians are being persecuted in this country; etc, etc, etc.

None of those things are remotely true, of course. Violent crime has been going down for 25 years now and immigrants commit crimes at a far lower rate than American citizens do. Certainly some Muslims are a threat, but other Muslims are absolutely crucial to our ability to prevent that threat from becoming a reality. And Christians are still overwhelmingly the dominant religious group that holds nearly every seat of power and they are far more likely to be carrying out the persecution than suffering from it.

Trump pushed every emotional button that exists in the conservative mind, firing up the tribe and even more deeply entrenching them in their terrified little world in which they believe themselves to be besieged on all sides. He tapped into the deep veins of anti-intellectualism and paranoia that Hofstadter so accurately identified in the 50s and 60s. Back then it was the John Birch Society that best represented those things; today it’s the Tea Party and the hardcore base of the Republican party.

Roberts’ essay is very long and gets into some very important subjects. I urge you all to read the whole thing. I also urge you to recognize that, while conservatives are considerably worse when it comes to tribal epistemology, liberals often show the same kind of epistemic closure. Just look at the proliferation of liberal fake news sites, copying the conservative media formula and adopting it for the other tribe. I regard this as a very dangerous thing and have been on something of a crusade against it. If we believe in rationality and in a world where accuracy matters, we should not be copying that behavior, we should be fighting against it.

April 3, 2017 CNN: FBI Has Evidence of Trump Collusion With Russians
Recent Comments
0 | Leave a Comment
Browse Our Archives
get the latest from
Nonreligious
Sign up for our newsletter
POPULAR AT PATHEOS Nonreligious
1