Leaving Congress did nothing to prevent Michele Bachmann from spouting breathtakingly stupid things. The latest is her claim that liberals are bringing about the coming of the Antichrist by espousing “manmade, one-world system.” Whatever that means. 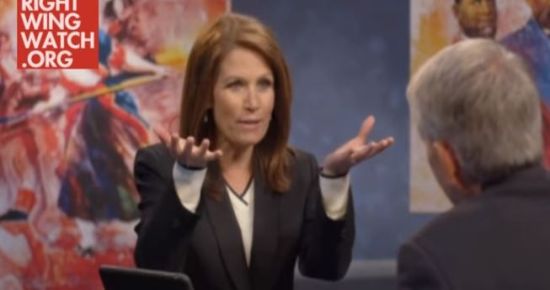 Bachmann said that Donald Trump’s opponents, much like the people who built the Tower of Babel, are rebelling against God to bring about “the creation of a manmade, one-world system. And scripture tells us that in the End Times, that is what Antichrist will be, he will be a part of a one-world system.”

“There are people who reject Judeo-Christian truth and instead want to insert and usurp control of all of our lives with a global, economic and political government,” she said.

So shouldn’t she be celebrating this? After all, that means Jesus is coming back really soon and that’s the whole goal for the wingnuts, isn’t it? She should be thanking us!

April 6, 2017 Jones: Trump is Preparing to Nuke China
Recent Comments
0 | Leave a Comment
Browse Our Archives
get the latest from
Nonreligious
Sign up for our newsletter
POPULAR AT PATHEOS Nonreligious
1