Mikey Gets a Non-Threatening but Inane Email

Mikey Gets a Non-Threatening but Inane Email April 24, 2017 Ed Brayton

My friend Mikey Weinstein gets a lot of nasty emails containing threats and anti-Semitic bigotry, but this one is a bit different. The person went to a debate that he participated in and writes a polite but highly illogical email preaching at Mikey to convert to Christianity. I’m going to actually respond to this one.

My husband and I and our next door neighbors from Denver all came to your recent debate at Colo. Christian Univ. We are committed Christians who don’t just “think” our faith is right because we ‘suspect” that it is. We know it is right. And the only one which is as says John 14:6. There are no other exceptions.

No, you don’t know that it is, you believe that it is. Muslims, Hindus, Jews and Zoroastrians are just as certain that their beliefs are true and justify it on the same basis of faith that you do.

We have heard and seen a lot about you through the years. To be honest we expected the worst when we heard you were to be invited to the debate. But I must say however that you were very pleasant and nice. Even though it is very clear that you do not understand where you are going to go after you die unless you accept Jesus Christ as your Savior. It is sad that you reject the Lord and we grieve for your eternal fate and that of your family.

Hell is a real place and it looks like you are going to be a permanent resident there but we hope not.

You said some funny things too which made us laugh but mostly you were firm and not mean. You are a smart guy. But we feel so badly that you cannot allow yourself to come to walk with our Lord. Because hell is not very funny Mr. Weinstein. Do you really want to join all of those who are suffering in hell for rejecting the Word and the Son? Isn’t the choice pretty simple and straight forward? Your a lawyer and seem be real smart. But in saying no to Jesus you are unwise and will pay dearly for your rejection of his Love.

Our neighbors and us had a bible study at their house the next night with other friends. And we talked about this debate a lot. We could not help but notice all of the security activities and precautions. What looked like a lot of guards and police. A lot around you especially after the debate when people came over to try to talk to you. Was all of that really necessary as this debate was held at a Christian university campus where love is King and not hate? I could understand it if you spoke at a godless place like UCAL Berkeley or CU Boulder. But what do you have to fear from the followers of Jesus Christ? It is us Christians and not you jewish nonbelievers who are facing hate and need the guards.

This is just bafflingly stupid. No, Mikey needs those bodyguards precisely because he’s on the campus of a Christian university. He gets threats from Christians on a pretty much daily basis, including several of them prior to this debate. You may think that Christianity makes someone peaceful and non-violent, but reality says otherwise. Christians have murdered gay people, bombed abortion clinics, blown up government buildings and more. And please don’t try the “they weren’t real Christians” nonsense. You wouldn’t buy that from Muslims, so you don’t get to use it either.

And these threats are not merely academic. Mikey’s house has been attacked, the windows shot out, swastikas and crosses painted on the walls, animals killed. He has to travel with a bodyguard at all times and prior to that very debate, one of the CCU cops actually emailed him questioning why he needed protection. He was wearing a bulletproof vest during the debate because of those threats. Your view of the world could not be more opposite of reality.

Please consider the major role you play with our military. And the serious consequences of your ungodly crusade to take the Love and Peace of Jesus Christ away from those who need it most. Our brave mens and women in uniform. You try to justify this with the constitution but the constitution allows Jesus to be heard and not silenced. American history and Christian history cannot be separated Mr. Weinstein. Why do you fight against this obvious fact?

Oi vey. Of course the Constitution “allows Jesus to be heard” (more accurately, it allows his followers to be heard). But that has nothing to do with what Mikey or MRFF do. What the constitution does not allow is military commanders to use their position to proselytize those under their command or force them to take part in any kind of religious exercises. The constitution also “allows Mohamed to be heard,” but the moment a military commander tried to push Islam on their troops, you would suddenly discover this huge threat to separation of church and state. Because you’re a clueless hypocrite. 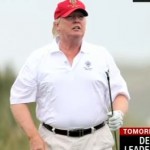 April 24, 2017 Trump and the First 100 Days
Recent Comments
0 | Leave a Comment
Browse Our Archives
get the latest from
Nonreligious
Sign up for our newsletter
POPULAR AT PATHEOS Nonreligious
1

Beer Served In A Dead Squirrel? - The...
Sweden's Disgusting Food Museum has a new exhibit featuring disgusting alcohol. If...
view all Nonreligious blogs
What Are Your Thoughts?leave a comment
Copyright 2008-2020, Patheos. All rights reserved.