Billy Graham’s daughter Anne Graham Lotz is confused about a lot of things, but let’s start with American history. In an interview to discuss her leading of the National Day of Prayer, she delivered the usual litany of fake Christian nation history that has been debunked again and again.

Q: Why is prayer needed for our nation?

A: We need God. Our nation is unraveling … disintegrating into anger, anarchy, division. The polarization seems to be paralyzing our government. There seems to be little civil discourse and lots of chaos and confusion. At the same time, we are being threatened by terrorists who are dedicated to destroying us. God promised in 2 Chronicles 7:14 – “If my people, which are called by my name, shall humble themselves, and pray, and seek my face, and turn from their wicked ways; then will I hear from heaven, and will forgive their sin, and will heal their land.”

God has promised to hear us, forgive us and heal us on the condition that we pray. Therefore prayer is essential. It is not an option, it is a necessity.

Even if this verse were accurate, it is speaking of the ancient Israelites, not America. “My people” were the Jews, his “chosen people.” Not Americans.

Q: Some might confuse NDP efforts to promote nationalism over Christian ideals. What is your response to that belief?

A: There have been times when the confusion has been understandable. Yet as a nation we seem to have lost our identity. We are one nation, under God. Not just any god. But the living God. The Creator. The God of Abraham, Isaac and Jacob. The Father of Jesus Christ.

Our national motto is “In God We Trust.” But in our rhetoric, our political correctness, our desire to be inclusive and tolerant, and even in some of our legislation, we are rejecting the God of our fathers, abandoning His moral laws, principles, and values. God clearly warns us that if we forsake Him, He will forsake us. I believe God is in the process of removing His hand of blessing from America. It’s imperative for our own survival as a nation that we return to Him before it’s too late, and plead with Him to return to us.

I find it amusing that she talks about the founding fathers while quoting a national motto that was adopted more than a century after the last of them died. That isn’t the national motto they wanted. Their motto was E Pluribus Unum — out of many, one. “In God We Trust” was the result of a hysterical overreaction to “godless communism” in the 1950s. And lots and lots of Americans do not, in fact, trust in God, or even believe in one.

And the truth is that we rejected the moral laws commanded by God in the Bible from the very beginning. The First Amendment guarantee of freedom of religion is a blatant contradiction to the command not to worship other gods. We allow blasphemy, we allow lying (except in specific situations like perjury), we allow coveting (indeed, much of our economy is built on it). At least 7 of the Ten Commandments would be illegal to be enforced under our Constitution. And the Christian right of that day recognized that and threw quite a fit about it. They lost. 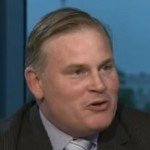