Greg Gianforte is a Republican candidate for the House from Montana and he’s a big supporter of Douglas Wilson, a Christian Reconstructionist who thinks slavery was just dandy for black people. Oh, and rape is really the fault of feminism.

In a letter to the Missoulian, Laurie Franklin, the spiritual leader of Har Shalom Synagogue, wrote about Rose and Saunders, as well as Idaho’s Doug Wilson, whom some have called a neo-Confederate after he wrote in 1996 that black families might have been their strongest during slavery. He founded the Association of Classical & Christian Schools. Gianforte once sat the group’s board because of his leadership of a private Christian school in Bozeman that his children attended.

If you sat on the board of Wilson’s group, you can’t claim not to have been aware of Wilson’s barbaric views, which Gianforte has claimed after giving money to white supremacists in the past. Wilson’s views are very well known and taught in the schools his organization created.

Casey Sanchez of the Southern Poverty Law Center found that Wilson, a self-described “paleo-confederate,” lauded slavery in the South as a “life of plenty.”

Defending the Confederacy as “right on all the essential constitutional and cultural issues surrounding the war,” Wilson has distinguished himself from neo-Confederates in this way: “I would define a neo-Confederate as someone who thinks we are still fighting that war. Instead, I would say we’re fighting in a long war, and that [the Civil War] was one battle that we lost.”

He also declared his support for “execution for adultery” and the “exile” of “some homosexuals,” claiming that “sodomy is worse than slavery.”

On women and sexual violence, Wilson said that women who refuse to walk with a male escort are complicit in their own rapes: “One consequence of rejecting the protection of good men is that you are opening yourself up to the predations of bad men.”

And more from Wilson on feminism and rape:

When we quarrel with the way the world is, we find that the world has ways of getting back at us. In other words, however we try, the sexual act cannot be made into an egalitarian pleasuring party. A man penetrates, conquers, colonizes, plants. A woman receives, surrenders, accepts. This is of course offensive to all egalitarians, and so our culture has rebelled against the concept of authority and submission in marriage. This means that we have sought to suppress the concepts of authority and submission as they relate to the marriage bed.

But we cannot make gravity disappear just because we dislike it, and in the same way we find that our banished authority and submission comes back to us in pathological forms. This is what lies behind sexual “bondage and submission games,” along with very common rape fantasies. Men dream of being rapists, and women find themselves wistfully reading novels in which someone ravishes the “soon to be made willing” heroine. Those who deny they have any need for water at all will soon find themselves lusting after polluted water, but water nonetheless.

This is the guy Gianforte has given money to, supported and associated with for a very long time. 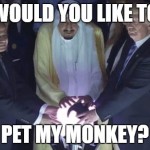 May 23, 2017 Sinkhole Opens at Mar-a-Lago
Recent Comments
0 | Leave a Comment
Browse Our Archives
get the latest from
Nonreligious
Sign up for our newsletter
POPULAR AT PATHEOS Nonreligious
1