Alex Jones and the Pedophile Colony on Mars

Kind of sounds like the title of a new book in a Harry Potter-like series, doesn’t it? Alex Jones had former CIA agent and Hillary Clinton-hating conspiracy nut Robert David Steele on his show the other day and the two of them talked about the pedophile colony on Mars.

There’s also the issue of the child-trafficking ring operating in secret on the planet 33.9 million miles from earth, according to a guest on the Alex Jones Show.

“We actually believe that there is a colony on Mars that is populated by children who were kidnapped and sent into space on a 20-year ride,” Robert David Steele said Thursday during a winding, conspiratorial dialogue with Jones about child victims of sex crimes. “So that once they get to Mars they have no alternative but to be slaves on the Mars colony.”…

On Thursday’s Infowars broadcast, Steele appeared to connect the kidnapped children being held captive on Mars to pedophile rings who allegedly use children for their youthful body parts and energy.

“Pedophilia does not stop with sodomizing children,” Steele said. “It goes straight into terrorizing them to adrenalize their blood and then murdering them. It also includes murdering them so that they can have their bone marrow harvested as well as body parts.”

“This is the original growth hormone,” Jones said.

People listen to these guys. Take the seriously. Believe them. It’s enough to make one weep for the human race. 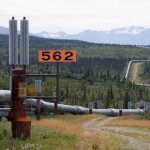 July 2, 2017 A Bipartisan Push to Close an Oil Pipeline
Recent Comments
0 | Leave a Comment
Browse Our Archives
get the latest from
Nonreligious
Sign up for our newsletter
POPULAR AT PATHEOS Nonreligious
1