It’s time to play another round of Who Does Theodore Shoebat Want to Kill Today? *spins the wheel* And the answer is: Transgender kids and their parents. Because they’re wicked and evil, you see. And he has Bible verses that say nothing about that but he’s sure help make his case.

Reacting to a newspaper article about a clinic in England where transgender kids can get counseling and medical care, the Christian fascist Shoebat writes:

This is absolute perversion. These children are utterly wicked. The parents who encourage this behavior should be arrested and executed, and the children should be rehabilitated. If they cannot be rehabilitated, well the Bible makes it very clear: “Then all the men of his city shall stone him to death with stones; so you shall put away the evil from among you, and all Israel shall hear and fear.” (Deuteronomy 21:21) And also: “And whoever blasphemes the name of the Lord shall surely be put to death.” (Leviticus 24:16) But the people of Great Britain will never accept the divine law, because they have been utterly corrupted, through protestantism and darwinism. They keep talking about “Sharia law” taking over England, but they will never talk about sodomite sharia. That is because this jabbering about “Sharia law” is a distraction to the reality that Sodom is conquering the world. Who shall fight it back? I have not seen any. Bring back the Inquisition.

What would be the difference between what Shoebat wants and the worst versions of Sharia law? The only difference is that they call the God by a different name. But let’s look at those Bible verses. The verse in Deuteronomy is not talking about gay or trans people at all, it’s talking about unruly children who won’t listen to their parents.

18 If someone has a stubborn and rebellious son who does not obey his father and mother and will not listen to them when they discipline him, 19 his father and mother shall take hold of him and bring him to the elders at the gate of his town. 20 They shall say to the elders, “This son of ours is stubborn and rebellious. He will not obey us. He is a glutton and a drunkard.” 21 Then all the men of his town are to stone him to death. You must purge the evil from among you. All Israel will hear of it and be afraid.

But the parents he’s referring to support their kids being trans and want to help them, so they aren’t being unruly or disrespectful. And they certainly aren’t gluttons or drunkards. This verse has nothing remotely to do with what Shoebat is talking about, but you have to justify your bloodlust for murdering people you disapprove of somehow. It also has nothing to do with blasphemy, the subject of the second verse he cites.

Let’s call Shoebat exactly what he is, a Christian psychopath bent on wholesale slaughter. A man who dreams of having the power to commit mass genocide. Maybe we should just call him Adolf. 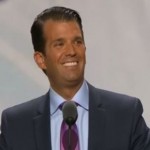 July 14, 2017 Senate Health Care Bill 2.0: Even Worse This Time
Recent Comments
0 | Leave a Comment
"That's howler monkey to you, bub."
NSAlito Eric Trump Says They Went ‘Out ..."
"I bow to your keenly deployed skills of reference, filter befuddling and acronyms. If only ..."
Noah Tahl Trump Adds Starr Dershowitz to Impeachment ..."
"Trump is beginning to use the Royal "We" I see..... as in himself....."
Rann Trump Selling American Troops to Saudi ..."
"I’ve begun to regard Dershowitz as an anarchist."
Maltnothops Trump Adds Starr Dershowitz to Impeachment ..."
Browse Our Archives
Follow Us!