On Friday, a bronze state of famed attorney Clarence Darrow, who defended teacher John Scopes on charges of teaching evolution in the infamous Scopes trial in 1925, was unveiled at the courthouse in Dayton, Tennessee, site of the trial. 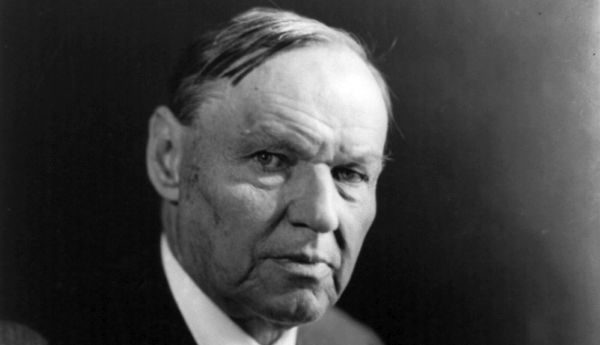 A bronze of Clarence Darrow today joined his Scopes Trial adversary in front of the Rhea County Courthouse here for the first time in nearly a century amid music from the 1920s, people in period dress, and onlookers sweating in the July heat.

“This isn’t just an event. This is history,” Freedom From Religion Foundation co-president Dan Barker said after the statue unveiling. “This installation of the statue is an historical event in itself.”

There were no protests or demonstrations, though they were expected. The crowd gathered in downtown Dayton talked, laughed and took photos of the newly installed Darrow statue and the existing one of Bryan with the iconic courthouse where the Scopes trial took place as a backdrop.

There were no protests despite the efforts of one local woman who actually suggested violence to prevent the statue from going up.

Clarence Darrow probably could not have drawn a more passionate opponent in post-William Jennings Bryan- era Dayton than June Griffin, a longtime activist who fought to post the Ten Commandments in 88 of Tennessee’s 95 county courthouses.

Griffin, 78, is no stranger to controversy or the spotlight, and she sees this as a battle between good and evil…

Griffin, a pastor of the American Bible Protestant Church, vehemently objects to Darrow’s presence at the courthouse in any form.

“I oppose it because it doesn’t belong there. That is sacred territory, where people from all over the world came to see these idiots that didn’t believe that God created the world and man,” Griffin said last week at her store in North Dayton. “They came from Oklahoma, Texas, in wagons. They traveled to see such a strange creature that would not believe the Bible.”…

Griffin said if Rhea Countians had a chance to vote on the statue and voted yes, she’d accede to the will of the people.

Until then she wants to debate Darrow supporters publicly, face to face, she said.

“No lawyers,” she said, “only personal confrontation. Engage them in the debate right there.”

If not that, she said, the humanists should have to defend themselves in court, without lawyers, who she says feed on taxpayer money and have no concern for people’s rights.

And barring that, Griffin suggests the association form its own militia.

“If worst comes to worst, I will challenge them to meet us in their uniforms at King’s Mountain, just like John Sevier did, and we’ll settle it over there,” Griffin said. During the American Revolutionary War, Sevier led patriots to battle against loyalist militias in South Carolina.

Yeah, that’s not too unhinged or anything.

July 16, 2017 Sessions Lies About Study on Crime and Sanctuary Cities
Recent Comments
0 | Leave a Comment
Browse Our Archives
Follow Us!