A guy named Craig “Sawman” Sawyer, who claims to be an ex-Navy SEAL sniper, put a post on Facebook saying that if the Mueller investigation ends with Trump being removed from office, it will lead to another civil war and he and other “patriots” will “execute” people in a “gruesome massacre.” 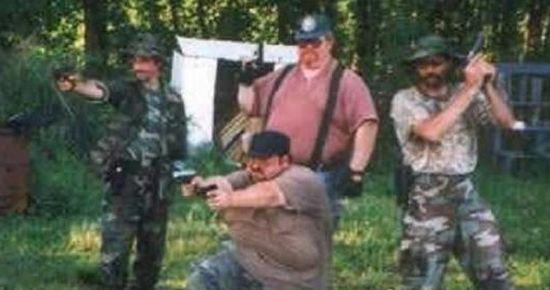 Patriots, this would be nothing less than an act of war against the American people. It would be the removal of our boldest defender & last possibility of maintaining our protective Constitution. Under the boot of globalists, life as we know it, would immediately decline to the model that suits the globalist interest – Marxist/Socialist/Communist. They get complete control, you get zero. Freedom, Gone! Liberty, Gone! This agenda is evil and simply cannot be allowed, at ANY cost.

Like ALL military, law enforcement and government officials, I took an oath to defend our Constitution against ALL enemies, foreign and domestic. By abandoning the rule of law and conducting a coup against the President & policies WE THE PEOPLE elected, they have made themselves enemies of the United States.

Under threat, ALL patriots, whether civilian, law enforcement, government, or military, have the duty to defend our Constitution against such enemies. Some speculate on “civil war”. I readily recognize a much more sobering reality: Anti-American subversives involved in ANY WAY in an unconstitutional coup against our President will be run down and executed immediately by the world’s most supreme warriors. There will be nowhere to run to, nowhere to hide, no mercy, no sense of humor. Harsh examples will be made. My prediction is it will be a gruesome massacre. Why? Because one side in this conflict has 8 Trillion bullets & the other side doesn’t know which bathroom to use. It will likely only take a few hours. Lessons will be learned. History will take note. Order restored.

Patriots, We The American People stand united as one, against ALL enemies. We are peace-loving people who abide by the rule of law. Prepare yourselves in case this ridiculous insanity actually gets played out and the rule of law goes out the window under their gross miscarriage of our legal process. Shaking my head…

United We Stand! At the ready. USA!

He makes clear in the comments that this “unconstitutional coup” refers to the Mueller investigation, saying that “the crooks were counting 100% on a corrupt investigation to try to accomplish what they can’t legally.” Except, of course, the Mueller investigation is entirely legal. And if it ends in impeachment, that will be an entirely constitutional process that is perfectly legal. And if it ends in indictments, that will also be 100% legal and the rights of the accused will be protected. They’ll have their day in court and be judged by a jury of their peers. Why this dolt thinks any of that is unconstitutional is a mystery.

And is there anything more ridiculous than people ranting about “globalists” — that is, multinational corporations whose loyalty is to their own profits rather than to nation-states — and calling them Marxists? Is there anything like a remotely coherent thought rumbling around in their empty heads? It doesn’t seem so. All they know is that commies are bad, so therefore everyone they don’t like or agree with is a commie. Yes, they’re that simpleminded.

August 8, 2017
Stone: Atheists Attacking Trump Because of Demons
Next Post