Christian fascist Kevin Swanson, who openly calls for the stoning to death of gay people but still gets major Republican presidential candidates to appear with him, also thinks that schools that teach thing’s contrary to (his twisted interpretations of) the Bible should be burned to the ground.

Swanson and Jack were outraged by the fact that Washington state public schools teach students about gender identity issues, with Swanson at one point connecting this issue to a rape allegation against an employee at the state’s Department of Fish and Wildlife…

After Swanson fumed that “the worst possible abominations are accepted in the state of Washington” and that the public schools are “whorehouses,” Jack declared that “we need to burn ’em down.”

Swanson and Jack agreed that if parents from the 1950s saw what was happening in the schools today, “they would want to burn them down.”

I imagine them getting aroused and fondling themselves just thinking about being able to stone “apostates,” along with gay people, blasphemers, women who aren’t virgins on their wedding day (but not men, of course) and everyone else their deranged God allegedly hates. This is their greatest dream, to be able to literally slaughter the people they despise. They make no attempt to hide it, they shout it from the rooftops. And yet they are able to organize conferences and get presidential candidates and major conservative leaders like Mike Huckabee and Ted Cruz to share the stage with them. Palling around with terrorists. That sounds familiar, doesn’t it? 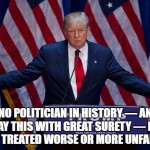 August 15, 2017 The White-Man-as-Victim Narrative
Recent Comments
0 | Leave a Comment
Browse Our Archives
Related posts from Dispatches From the Culture Wars