Donald Trump held an impromptu press conference on Tuesday and to describe it as surreal, even by his own standards, is to seriously understate the case. It was just one jaw-dropping statement after another as he found himself in a hole and just kept on digging. To wit:

Reporter: Why do you think these CEOs are leaving your manufacturing council?

Trump: Because they are not taking their job seriously as it pertains to this country. We want jobs, manufacturing in this country. If you look at some of those people that you’re talking about, they’re outside of the country. They’re having a lot of their product made outside. If you look at Merck as an example. Take a look where — excuse me, excuse me. Take a look at where their product is made. It’s made outside of our country. We want products made in the country. Now, I have to tell you, some of the folks that will leave, they are leaving out of embarrassment because they make their products outside and I’ve been lecturing them, including the gentleman that you’re referring to, about you have to bring it back to this country. You can’t do it necessarily in Ireland and all of these other places. You have to bring this work back to this country. That’s what I want. I want manufacturing to be back into the United States so that American workers can benefit.

Really? You’ve been lecturing them about manufacturing in this country? The guy who has made vast amounts of money on products made in China, Mexico and elsewhere? You want to make things in this country, start with your own products, you hypocritical jackass.

Reporter: Why did you wait so long to put that last statement out?

Reporter: It was at least 48 hours.

Trump: I wanted to make sure — unlike most politicians, that what I said was correct. Not make a quick statement. The statement I made on Saturday, the first statement, was a fine statement. But you don’t make statements that direct unless you know the fact. It takes a little while to get the facts. You still don’t know the facts, and it’s a very, very important process to me, and it’s a very important statement, so I don’t want to go quickly and just make a statement for the sake of making a political statement.

I just…WTF? I’ve never encountered a human being less concerned with getting the facts before making a statement than Trump. He almost never gets the facts right. He lies more than any person I’ve ever seen. Now suddenly he’s claiming to be an advocate of careful research and due diligence. This is comical to the point of being absolutely perverse. It’s like Jared from Subway claiming to be really concerned about the welfare of children.

Reporter: The CEO of Wal-Mart said you missed a critical opportunity to help bring the country together. Did you?

Trump: Not at all. I think the country — look, you take a look. I’ve created over a million jobs since I’m president. The country is booming, the stock market is setting records. We have the highest employment numbers we’ve ever had in the history of our country.

YOU created a million jobs? How exactly did you do that? You’ve not signed a single piece of legislation that has anything remotely to do with creating jobs. Those jobs that were created in the first six months of your term were about 10,000 fewer jobs than were created in Obama’s last six months in office. But you said those numbers were fake. You said the real unemployment rate was as high as 42%, now you’re crowing about the unemployment rate and taking credit for it when it’s being measured the exact same way. Which means you’re lying. As usual.

And then he totally reversed that lame statement he made on Monday and went back to “both sides are to blame.”

Trump: Excuse me, what about the alt-left that came charging at the, as you say, the alt-right. Do they have any semblance of guilt?

Trump: Let me ask you this. What about the fact they came charging — that they came charging, with clubs in their hands, swinging clubs? Do they have any problem? I think they do. So, you know, as far as I’m concerned, that was a horrible, horrible day-

Reporter: Is it the same level as neo-Nazis?

Reporter: Do you think what you call the alt-left is the same as neo-Nazis?

Another reporter: You said there was hatred, there was violence on both sides. Are there-

Trump: [Inaudible.] You have some very bad people in that group, but you also had people that were very fine people on both sides.

Yeah, those neo-Nazis were some fine people. You can tell by the way they shouted Nazi slogans. Every single person who marched in that rally was a white supremacist, whether they will acknowledge that or not. And they were there to protest the taking down of the statue because they’re white supremacists. That was their message. They support the Confederacy and want to reestablish it.

Another reporter: How concerned are you about race relations in America and do you think things have gotten worse or better since you took office?

Trump: I think they have gotten better- or the same- I- look. They’ve been frayed for a long time, and you can ask President Obama about that because he’d make speeches about it. But, I believe that the fact that I brought in, it will be soon, millions of jobs — you see where companies are moving back into our country — I think that’s going to have a tremendous positive impact on race relations. We have companies coming back into our country, we have two car companies that just announced, we have FoxConn in Wisconsin just announced. We have many companies, I say pouring back into the country. I think that’s going to have a huge, positive impact on race relations. You know why? It’s jobs. What people want now, they want jobs. They want great jobs with good pay and, when they have that, you watch how race relations will be. And I’ll tell you, we’re spending a lot of money on the inner cities. We’re fixing the inner cities. We’re doing far more than anybody’s done with respect to the inner cities. It’s a priority for me, and it’s very important.

Jesus H. Christ. This man is simply deranged. I don’t think I can stand to read or post any more of this. 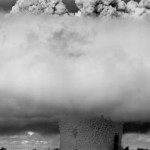 August 16, 2017 Jones: The KKK is Really Jewish Actors
Recent Comments
0 | Leave a Comment
Browse Our Archives
get the latest from
Nonreligious
Sign up for our newsletter
POPULAR AT PATHEOS Nonreligious
1