This is an article from last year, when the issue of Confederate statues was raging then. It’s written by a biographer of Robert E. Lee, who points out that Lee himself did not think there should be statues erected of Confederate leaders because they would only cause further division in the country.

The unending controversy would not have surprised Lee himself. It is why he opposed building Confederate memorials in the first place…

Perhaps expecting the general who lost the Battle of Gettysburg to want his army’s movements marked in stone was asking too much, but Lee’s refusal went further. Rather than raising battlefield memorials, he favored erasing battlefields from the landscape altogether.

“I think it wiser moreover not to keep open the sores of war, but to follow the examples of those nations who endeavoured to obliterate the marks of civil strife and to commit to oblivion the feelings it engendered,” he wrote…

Lee feared that these reminders of the past would preserve fierce passions for the future. Such emotions threatened his vision for speedy reconciliation. As he saw it, bridging a divided country justified abridging history in places.

It’s almost important to note that most of the statues that exist around the country were erected not to celebrate Southern “heritage” but to support the Jim Crow laws and to cut against arguments for equality, and were erected decades after the war ended for those purposes. Historian Karen Cox notes:

Almost none of the monuments were put up right after the Civil War. Some were erected during the civil rights era of the early 1960s, which coincided with the war’s centennial, but the vast majority of monuments date to between 1895 and World War I. They were part of a campaign to paint the Southern cause in the Civil War as just and slavery as a benevolent institution, and their installation came against a backdrop of Jim Crow violence and oppression of African Americans. The monuments were put up as explicit symbols of white supremacy.

The group responsible for the majority of these memorials was the United Daughters of the Confederacy (UDC), among the most influential white women’s organizations in the South in the late 1800s and early 1900s. Honoring Confederate heroes, generals and soldiers was one of its primary objectives, and hundreds of monuments throughout the South — and beyond — serve as testimony to the Daughters’ aggressive agenda to vindicate the Confederacy…

The 1890s, when the UDC was founded and monument building began in earnest, was a decade of virulent racism across the South. Not content to disenfranchise black men, Southern whites went on a lynching spree. Ida B. Wells, the African American journalist and anti-lynching crusader, documented 186 lynchings of black people in 1893 alone — mostly men, but women and children, too. As she wrote in her account “The Red Record,” these “scenes of unusual brutality failed to have any visible effect upon the humane sentiments of the people of our land.”

Violence against blacks only increased in the early decades of the 20th century. In addition to continued lynching across the South, the Atlanta race riot of 1906 demonstrated how seriously white men took their supremacy over African Americans: An estimated 10,000 white men and boys in the city went after black men, beating dozens to death and injuring hundreds more.

Amid that brutality, the pace of Confederate monument construction quickened. The UDC and other like-minded heritage organizations were intent on honoring the Confederate generation and establishing a revisionist history of what they called the War Between the States. According to this Lost Cause mythology, the South went to war to defend states’ rights, slavery was essentially a benevolent institution that imparted Christianity to African “savages,” and, while the Confederates were defeated, theirs was a just cause and those who fought were heroes. The Daughters regarded the Ku Klux Klan, which had been founded to resist Reconstruction, as a heroic organization, necessary to return order to the South. Order, of course, meant the use of violence to subdue newly freed blacks.

During the era of Jim Crow, Confederate monuments could be placed most anywhere. Some were in cemeteries or parks, but far more were erected on the grounds of local and state courthouses. These monuments, then, not only represented reverence for soldiers who fought in a war to defend slavery. They also made a very pointed statement about the rule of white supremacy: All who enter the courthouse are subject to the laws of white men.

Slavery is at least as much a universal evil as the Holocaust, yet there are no statues to Hitler and other Nazi leaders in Germany, nor does anyone think it’s “erasing history” to not have them there. You know what they do have? Monuments to the victims of the fascists. If you want to use such displays to tell the story of history, why not tell the story of slavery and the devastation it brought? Why celebrate those who defended this monstrously immoral institution rather than those whose lives were destroyed by it?

The truth is that those statues were erected not as a celebration of heritage but as a ritual of territorial marking, a means of telling black people that even though we forcibly brought them here, robbed them of their own history and committed the most horrible atrocities against them, they’re not truly welcome here and they will always be second-class citizens.

If you think it’s okay to celebrate Confederate generals and leaders like Nathan Bedford Forrest, who later founded the KKK — and read the inscriptions and plaques that accompany most of the statues, they are intended to celebrate them — then ask yourself how you think Jews would feel in Germany if public parks and courthouses were decorated with statues of Hitler, Himmler and other Nazi leaders. And if you don’t care about how that would make either black people or Jews feel, then frankly, you’re probably a white supremacist. 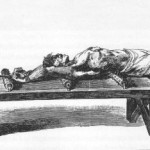