What Roy Moore and Donald Trump Have in Common

What Roy Moore and Donald Trump Have in Common September 28, 2017 Ed Brayton

Donald Trump may have endorsed Luther Strange in that Alabama senate race against Christian fascist Roy Moore, but he and Moore have one thing very clearly in common: Neither of them cares in the slightest whether anything they say is true or not. Here’s the proof:

Jeff Stein
Some right-wing conservatives think Sharia law is a danger to America — do you?

Roy Moore
There are communities under Sharia law right now in our country. Up in Illinois. Christian communities; I don’t know if they may be Muslim communities.

But Sharia law is a little different from American law. It is founded on religious concepts.

Roy Moore
Well, there’s Sharia law, as I understand it, in Illinois, Indiana — up there. I don’t know.

Jeff Stein
That seems like an amazing claim for a Senate candidate to make.

Roy Moore
Well, let me just put it this way — if they are, they are; if they’re not, they’re not.

That doesn’t matter. Oklahoma tried passing a law restricting Sharia law, and it failed. Do you know about that?

Roy Moore
Well, it did. The thing about it is it shouldn’t have failed because it can be restricted because it’s based on religious principles …

There are two appalling parts to that. The first is that he simply doesn’t care whether what he said was true or not. “If they are, they are; if they’re not, they’re not, that doesn’t matter.” Well yes it damn well does matter because you claimed it to be true. And it’s not. This is the very essence of Trumpianism, not just being careless with the facts, but literally not caring about the facts.

The second is the staggeringly hypocritical claim that Sharia law, which has zero possibility of being enacted in this country under any circumstances, can be restricted because it’s “based on religious principles.” This from the man who continually quotes the Bible to justify public policy, including putting gay people to death. Is this a Trumpian lack of self-awareness? Or is he just lying and counting on his followers to be too stupid to figure it out? Ultimately, it doesn’t matter. What matters is that the man is a clear and present danger to the country in any position of power. 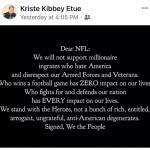 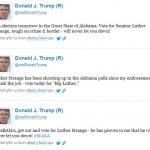