The Institute on the Constitution, a Christian dominionist group founded by Michael Peroutka, former Constitution Party presidential candidate, has lost its tax exemption from the IRS for failure to file tax returns for the last several years.

The Internal Revenue Service has revoked the tax-exempt status of the Institute on the Constitution, an organization founded by Anne Arundel County Councilman Michael Peroutka to teach his ideas on government.

The Millersville Republican created the institute in 2004 — the same year as Peroutka’s Constitution Party campaign for president — to spread his interpretation of the U.S. Constitution, which he bases on his Christian faith.

The IRS revoked the Pasadena organization’s exemption status in May after it failed to provide yearly finance forms detailing charitable contributions, donations and other financial information.

I’ve written a lot about Peroutka over the years. Like Roy Moore, he’s a Christian fascist with an utterly bizarre interpretation of the Constitution. He’s very wealthy and is also a young earth creationist. And he believes that the Constitution was written as an explicitly Christian document to create a theocracy. 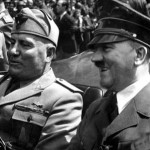 October 7, 2017 More Evidence That Milo Loves Him Some Nazis
Recent Comments
0 | Leave a Comment
"Hi ,for anyone wanting to follow the friendly atheist on Onlysky, it will go live ..."
david coxill Saying Goodbye for the Last Time
"Oh yes.. The privilege of being called names by people who have zero understanding what ..."
Standingbear Gallups: Satan Has Convinced Christians They ..."
"I wouldn't mind idiots saying "Black Lives Matter" IF They Meant it.Clearly that is not ..."
Standingbear Gallups: Satan Has Convinced Christians They ..."
"The ironic thing is.. Black lives Clearly do not matter.Why else would you ignore the ..."
Standingbear Gallups: Satan Has Convinced Christians They ..."
Browse Our Archives
get the latest from
Nonreligious
Sign up for our newsletter
POPULAR AT PATHEOS Nonreligious
1