Christian fascist Theodore Shoebat has found another group of people he wants to murder in the name of God: Me. And most of you too. All atheists, in fact. But being the magnanimous guy he is, he’s willing to bring back the Inquisition so we can all be tortured and given the chance to forcibly convert.

But remember, it’s Sharia law that we really have to worry about. Those evil Muslims might impose the wrong kind of religious fascism on society! We can’t let that happen. We’ll be so much happier being slaughtered by Christians than by Muslims, won’t we? 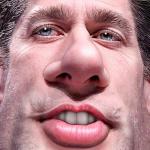