I’ve made no secret of my total disdain for presidential press secretaries of either party. The job title might as well be Professional Liar, because that is what they do. But some do it more often than others and with less skill, and the rationalizations they come up with just don’t pass the laugh test. Like this, from Sarah Huckabee Sanders, trying to explain why Trump was so gushing in his good wishes for Rob Porter after domestic violence allegations forced him to resign: 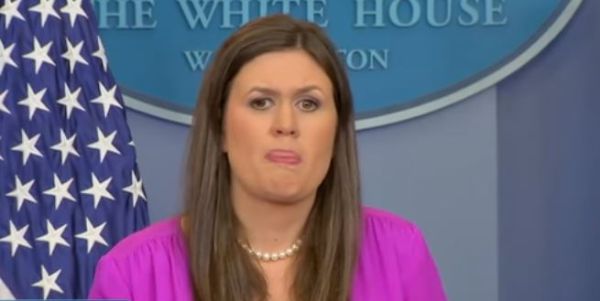 “I think the president of the United States hopes that all Americans can be successful in whatever they do,” Sanders said. “And if they’ve had any issues in the past — I’m not confirming or denying one way or the other — but if they do, the president wants success for all Americans.”

She concluded: “He was elected to serve all Americans, and he hopes for the best for all American citizens across the country.”

The mind absolutely boggles. How could any sentient human being say that with a straight face? I mean, seriously, how? You have to be a mindless robot to do so. You have to have a total disregard for both the truth and the intelligence of the people you’re addressing because you have to know that not a single human being is ever going to believe that spin in a million years. You basically have to be dead inside.

February 13, 2018 Trump's Budget: More Guns, Less Butter
Recent Comments
0 | Leave a Comment
"OnlySky is now live: https://onlysky.media/I am adding Ed to my OnlySky authors shortcuts folder so ..."
Thomas Fitzpatrick Saying Goodbye for the Last Time
"Hi ,for anyone wanting to follow the friendly atheist on Onlysky, it will go live ..."
david coxill Saying Goodbye for the Last Time
"Oh yes.. The privilege of being called names by people who have zero understanding what ..."
Standingbear Gallups: Satan Has Convinced Christians They ..."
"I wouldn't mind idiots saying "Black Lives Matter" IF They Meant it.Clearly that is not ..."
Standingbear Gallups: Satan Has Convinced Christians They ..."
Browse Our Archives
get the latest from
Nonreligious
Sign up for our newsletter
POPULAR AT PATHEOS Nonreligious
1