Corsi: ‘Hand of God’ Will Lead Trump to Try Clinton and Obama for Treason

Conspiracy nut Jerome Corsi has joined the “Trump has been anointed by God” crowd and says that “Jesus Christ has entered his life,” which will lead him to destroy the “deep state.” That includes arresting and trying Hillary Clinton and Barack Obama for treason. 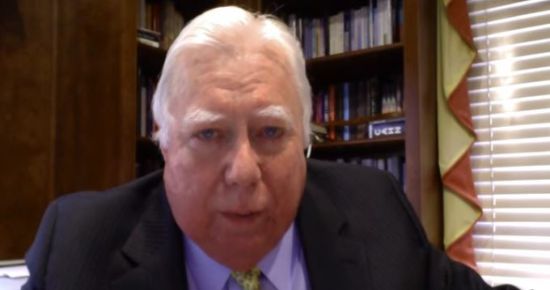 “He has gotten to be more of a religious man than he ever was,” Corsi said of Trump. “He, I think, has had a Christian awakening. I think Jesus Christ has more entered his life today than ever.”

“I think the hand of God has touched Donald Trump and I do see the hand of God in his presidency,” he added. “He is going to expose the deep state and bring these people to justice in a way that no one else could, even if it involves military tribunals, even if it involves charging Hillary and Barack Obama with treason, which I believe is the end game here and I think it’s going to be played out.”

And you’ll be wrong, as you are on everything. It’s hilarious to me how they worship this version of Trump that exists only in their fevered imaginations. Trump is not some anti-globalist and economic nationalist. He pretends to be. He talks like one. But he’s made untold millions selling products made in sweatshops overseas to keep labor costs down and his profits up. But they view him as an empty vessel into which they can pour their most fervent desires. Basically, he’s a Rorschach test for right-wing crackpots — what they see is about them, not him.

And as a friend just pointed out, this is quite similar to the Bible. Two people can read it and one comes away as a Christian Reconstructionist who wants to murder gay people and women who aren’t virgins on their wedding day, while the other comes away believing that Jesus wants them to fight against inequality and injustice, to take care of the poor and the sick. You see in it what you brought to it.

April 14, 2018
Black Teen Asks for Directions, Gets Shot At By Racist Jerk
Next Post

April 15, 2018 Paul Ryan Was a Con Artist on Fiscal Responsibility
Recent Comments
0 | Leave a Comment
"Hi ,for anyone wanting to follow the friendly atheist on Onlysky, it will go live ..."
david coxill Saying Goodbye for the Last Time
"Oh yes.. The privilege of being called names by people who have zero understanding what ..."
Standingbear Gallups: Satan Has Convinced Christians They ..."
"I wouldn't mind idiots saying "Black Lives Matter" IF They Meant it.Clearly that is not ..."
Standingbear Gallups: Satan Has Convinced Christians They ..."
"The ironic thing is.. Black lives Clearly do not matter.Why else would you ignore the ..."
Standingbear Gallups: Satan Has Convinced Christians They ..."
Browse Our Archives
get the latest from
Nonreligious
Sign up for our newsletter
POPULAR AT PATHEOS Nonreligious
1