Travis Reinking, the guy who killed four people at a Waffle House in Tennessee the other day, was like an all-you-can-eat buffet of inane right-wing beliefs. For instance, when he was arrested outside the White House last year, he told police he was a “sovereign citizen.” That probably tells you all you need to know, but there’s more than that.

His mother, ironically, shared a meme on Facebook blaming school shootings on the lack of prayer in schools: 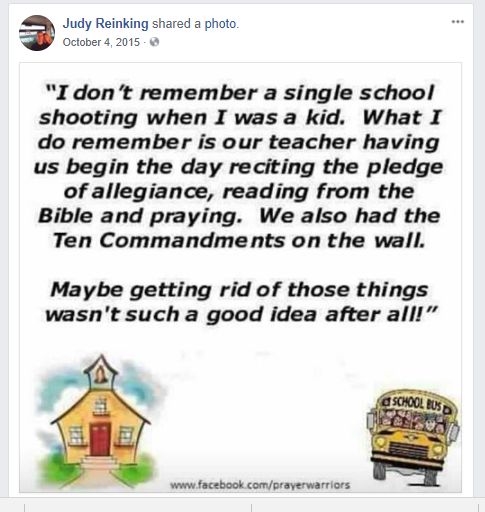 I mean, obviously, right? If we don’t force children to recite government-composed prayers, they’ll run right out and kill a bunch of people. Just like in all those other countries where they don’t have prayer in schools and gun violence is rampant…I mean, virtually non-existent. Makes perfect sense.

Travis himself posted about the Illuminati and other right-wing conspiracy theories. And then there’s how he got his guns back. This is exactly the kind of situation that stricter gun control laws can prevent. This guy had a history of bizarre behavior involving guns. He thought Taylor Swift had hacked his cell phone and was stalking him, for crying out loud. His guns were seized after the White House incident, but they were given to his father, who promptly gave them back to him. This is what background checks are designed to prevent, but it requires enforcement.