When ‘They’re Lying’ is Actually the Less Scary Option 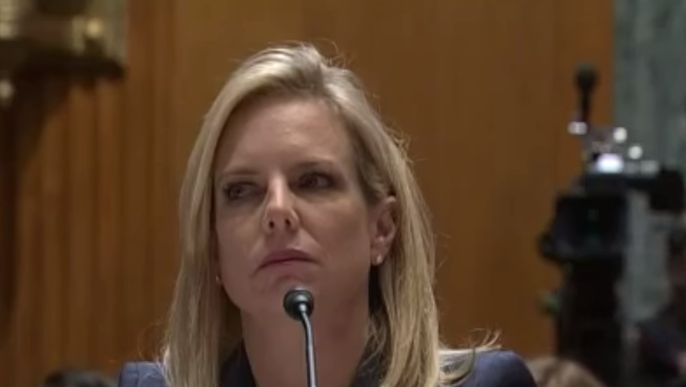 “Do you have any reason to doubt the Jan. 17th [2017] Intelligence Committee assessment that said it was [Russian President] Vladimir Putin who tried to meddle in this election to help President Trump?” Raju asked.

“I do not believe that I’ve seen that conclusion that specific intent was to help President Trump win,” Nielsen insisted. “I am not aware of that.”

I hope she’s lying, which she would be doing in order to not inflame Trump and make him throw a tantrum. Because if she really hasn’t bothered to read those assessments, she clearly would be in dereliction of duty. One of DHS’s key responsibilities is protecting our cyber security systems, including electoral systems. We’ve had the Russians hacking into servers of major political leaders and into voter registration systems (thankfully they can’t get to the actual voting systems because those don’t go online).

If the DHS Secretary really is unaware of all that and the highly publicized assessments from our intelligence services, that means she isn’t doing anything to fix and protect those systems. And that’s far more frightening than the prospect that she’s lying to avoid another flamefest from her boss.

May 24, 2018 Trump Admitted the Most Obvious Thing Ever
Recent Comments
0 | Leave a Comment
"Are they still around?"
♎Adamas🐉 Mikey Gets Email
"Yeah, he probably looked more like Jamie Farr than Ben Affleck."
♎Adamas🐉 Mikey Gets Email
"How dare you bring up what I said!"
Michael Cramer Dershowitz Calls Cooper, Toobin ‘Bullies’ for ..."
"Hey!! I want a man who will always be with me in difficult moments (and ..."
KatieHernandez24 Trump’s Mileage Standard Claims Contradicted by ..."
Browse Our Archives
Follow Us!

Nonreligious
Trump's Mileage Standard Claims Contradicted by His Own...
Dispatches From the Culture Wars
TRENDING AT PATHEOS Nonreligious