Erik Prince, the vile founder of private mercenary company Blackwater and brother of Education Secretary Betsy DeVos, is now cooperating with Robert Mueller’s investigation and has given them his computer and phone records as evidence, according to ABC News. That could be very dangerous for Trump. 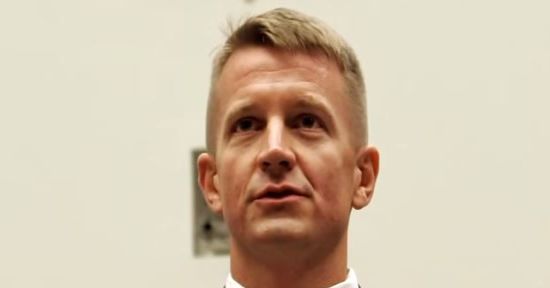 Prince, America’s most famous private military contractor, acknowledged last week that he “cooperated” with Mueller’s investigation of Russian interference in the 2016 presidential election after falling under scrutiny amid questions about an alleged effort to establish a backchannel between the Trump administration and the Kremlin, something Prince has vehemently denied.

ABC News has since learned that Mueller is also reviewing Prince’s communications, a sign that Mueller could try to squeeze Prince, as he has others, probing potential inconsistencies in his sworn testimony in an attempt to pressure him to turn into a witness against other targets of the investigation. In response to questions from ABC News, a spokesperson for Prince released a statement noting that Prince has provided Mueller with “total access to his phone and computer.”

“As Mr. Prince told the Daily Beast he has spoken voluntarily with Congress and also cooperated completely with the Special Counsel’s investigation, including by providing them total access to his phones and computer,” the spokesperson said. “Mr. Prince has a lot of opinions about the various investigations, but there is no question that they are important and serious, and so Mr. Prince will keep his opinions to himself for now and to let the investigators do their work. All we will add is that much of the reporting and speculation about Mr. Prince in the media is inaccurate, and we are confident that when the investigators have finished their work, we will be able to put these distractions to the side.”

Prince ties into so many potential criminal and political problems for Trump, from that secret meeting in the Seychelle Islands with Russian officials to the strong tilt in our Middle East policy toward Saudi Arabia and the UAE and against Iran. This is the kind of thing that prosecutors like to have before they get to interviewing the primary target because having those communications means they know what the honest answers are to many questions they might ask, so they will know if that person is lying. That person being Trump, a pathological liar.

June 26, 2018 The Profoundly Stupid New Argument to Discredit Mueller Investigation
Recent Comments
0 | Leave a Comment
"OnlySky is now live: https://onlysky.media/I am adding Ed to my OnlySky authors shortcuts folder so ..."
Thomas Fitzpatrick Saying Goodbye for the Last Time
"Hi ,for anyone wanting to follow the friendly atheist on Onlysky, it will go live ..."
david coxill Saying Goodbye for the Last Time
"Oh yes.. The privilege of being called names by people who have zero understanding what ..."
Standingbear Gallups: Satan Has Convinced Christians They ..."
"I wouldn't mind idiots saying "Black Lives Matter" IF They Meant it.Clearly that is not ..."
Standingbear Gallups: Satan Has Convinced Christians They ..."
Browse Our Archives
get the latest from
Nonreligious
Sign up for our newsletter
POPULAR AT PATHEOS Nonreligious
1