Like so many of his fellow Christian right leaders, Franklin Graham has sold his soul completely for Donald Trump. He is all-in, no matter what actions he has to now defend that he once condemned. On Twitter yesterday, he threatened the wrath of God for those who speak out with disapproval about Trump paying off multiple mistresses to buy their silence. 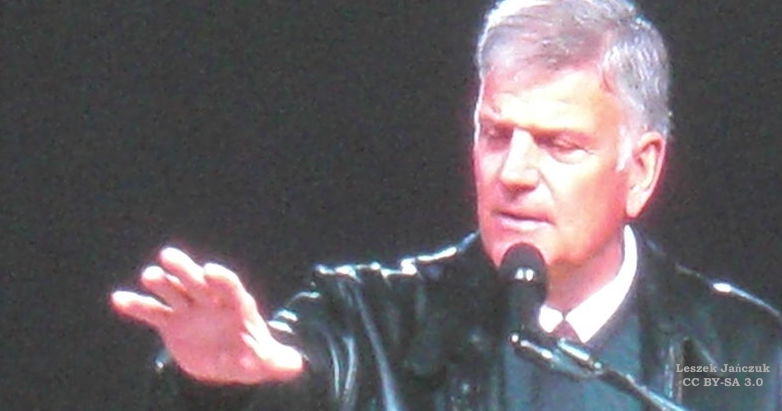 Everyone in the media is talking about the just-released tape & what the President said or didn’t say, what he meant or didn’t mean. It is a good moment to point out that everyone should realize that every word that is spoken or thought is recorded by God. 1/3

Here’s a sober warning from God’s Word, “What you have said in the dark will be heard in the daylight, & what you have whispered in the ear in the inner rooms will be proclaimed from the roofs” (Luke 12:3). 2/3

The Bible says it is appointed unto man once to die & then the judgment. We won’t be judged by media spin masters or forensic audio analysts, but you will be judged by truth & righteousness—by God Himself. Have you ever thought about what His verdict will be on your words? 3/3

Was this a warning to yourself, Franky? Because let’s look at your own words in a Wall Street Journal op-ed 20 years ago at the height of the Monica Lewinsky scandal. You said:

But the God of the Bible says that what one does in private does matter. Mr. Clinton’s months-long extramarital sexual behavior in the Oval Office now concerns him and the rest of the world, not just his immediate family. If he will lie to or mislead his wife and daughter, those with whom he is most intimate, what will prevent him from doing the same to the American public

So which of your words do you think God will judge most harshly? In both cases, you claimed to be speaking for him, yet you took the exact opposite positions. Gee, I wonder why that is? What is horrible, contemptible behavior by a Democrat is not only acceptable for a Republican, criticizing that Republican is so terrible that God will punish them for it. If there is a god, buddy, you are in deep doo doo. I suspect he would take your rank hypocrisy far more seriously than someone who took either position consistently.

July 26, 2018
The Obvious Link Between White Supremacy and Male Supremacy
Next Post

July 26, 2018 Trump Sycophants in the House File Impeachment Papers for Rosenstein
Recent Comments
0 | Leave a Comment
Browse Our Archives
get the latest from
Nonreligious
Sign up for our newsletter
POPULAR AT PATHEOS Nonreligious
1