He Likes Me! He Really Likes Me!

While his administration is unraveling around him and he frantically searches for the official who wrote that devastating op-ed piece for the New York Times highlighting the fact that those around him think he’s stupid and dangerous, Trump can at least get his fragile ego boosted by praise from the world’s most totalitarian dictator: 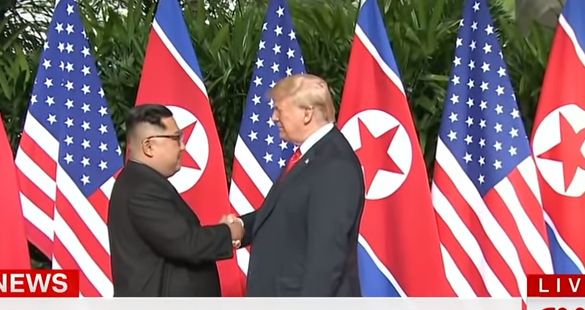 Kim Jong Un of North Korea proclaims “unwavering faith in President Trump.” Thank you to Chairman Kim. We will get it done together!

He likes me! He really likes me! Sure, everyone who works for him knows he’s an ignorant crackpot, but a guy who teaches his citizens that he’s a god, starves them to death, shuts them off from the rest of the world and murders his own family members by shooting them with anti-aircraft guns thinks he’s a swell guy. What better endorsement could he have than that? Now if he can just lock down the endorsement of Charles Manson, he’ll be unstoppable!

September 7, 2018 DeSantis' Running Mate Doesn't Like Trump
Recent Comments
0 | Leave a Comment
"This is all basically just Christianized Numerology...Need we remind you about Occult Practices go read ..."
BlueFeather Forget BC and AD. It’s now ..."
"I am thinking the same thing .It is at times like this I wish there ..."
david coxill Saying Goodbye for the Last Time
"Thanks for being so forthright."
Gary Whittenberger Supreme Court Justice Jay Sekulow?
"Just for the record, and so no one can say that I'm not mature enough ..."
S. Arch Supreme Court Justice Jay Sekulow?
Browse Our Archives
get the latest from
Nonreligious
Sign up for our newsletter
POPULAR AT PATHEOS Nonreligious
1