Robert Jeffress, the megachurch preacher who was one of Trump’s earliest and most vociferous endorsers, has a predictably stupid take on the Kavanaugh situation. Like virtually every other situation in the world, he views it as a grand battle between good and evil, God and Satan. 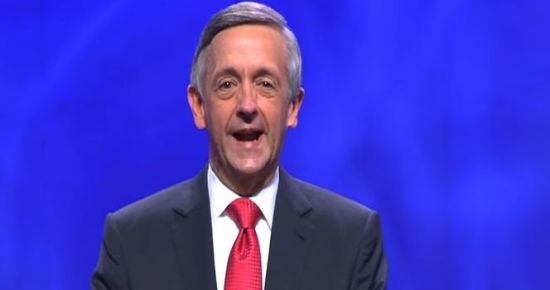 ROBERT JEFFRESS (PASTOR AND FOX NEWS CONTRIBUTOR): I have never seen conservative Christians as angry as they are right now over this debacle. Look, they realize now, conservative Christians, that the left is willing to do whatever it takes to cram their liberal agenda down the throats of Americans including destroying the foundation of our legal system, the presumption of innocence. And make no mistake about it, the reason the left hates Kavanaugh is not because of his judicial philosophy. It’s not because of what he may or may not have done to Dr. Ford. The Democrats don’t care one thing about Dr. Ford. They are afraid that if he is confirmed as a Supreme Court justice, he may chip away at Roe v. Wade and diminish the number of babies being murdered every year in the womb through abortion. Conservative Christians see this. They know this is not a battle between Republicans and Democrats, it’s a battle between good and evil, between the kingdom the of light and the kingdom of darkness, and that’s why they’re going to turn out in the 2018 midterms.

So original. So compelling. So…utterly moronic in every imaginable way.

October 1, 2018
No New Episode of Culture Wars Radio
Next Post

October 2, 2018 When You're Too Sexist for Fox News
Recent Comments
0 | Leave a Comment
Browse Our Archives
Follow Us!

Nonreligious
Dershowitz and Starr Working Together Could Be a...
Dispatches From the Culture Wars