Nate Silver on the Magnitude of the Blue Wave

Nate Silver on the Magnitude of the Blue Wave November 19, 2018 Ed Brayton

Nate Silver has an interesting set of tweets that put’s the blue wave midterm elections in historical context. He notes several things. First, turnout was incredibly high for a midterm election. Second, that the Democrats got almost as many votes for the House and Senate as Trump got in 2016, which has never come close to happening before. 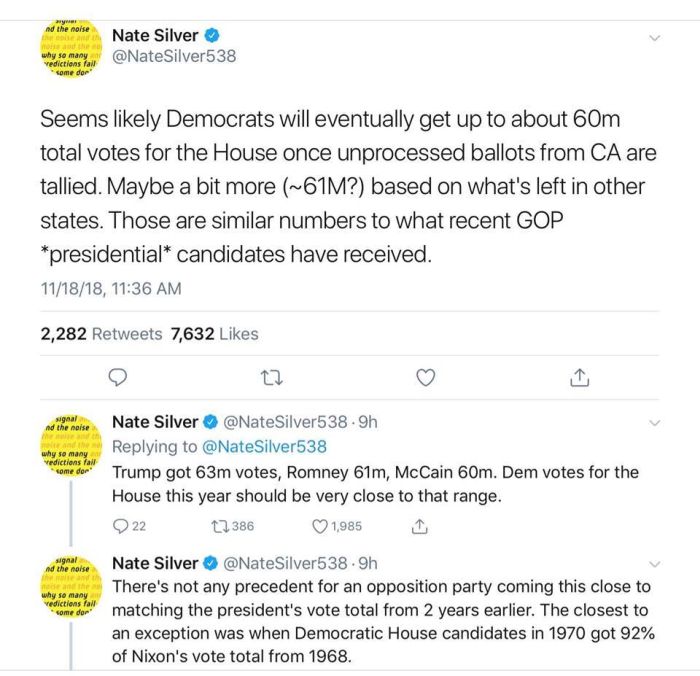 That’s pretty staggering. But of course, it’s only because of the eleventy gazillion illegal votes by members of MS-13 and “unknown Middle Easterners.”

November 19, 2018
Jackson: CNN is In League with Satan
Next Post

November 20, 2018 Dobbs' Fact-free Claim About Illegal Voting
Recent Comments
0 | Leave a Comment
"Ah, wouldn't this violate the new laws being passed about making white kids uncomfortable? They ..."
SPRuis Legislators Pushing Bible Courses in Public ..."
"There is also the factor that "Bible literacy" courses being taught are unfair to other ..."
Hominin Legislators Pushing Bible Courses in Public ..."
"OnlySky is now live: https://onlysky.media/I am adding Ed to my OnlySky authors shortcuts folder so ..."
Thomas Fitzpatrick Saying Goodbye for the Last Time
"Hi ,for anyone wanting to follow the friendly atheist on Onlysky, it will go live ..."
david coxill Saying Goodbye for the Last Time
Browse Our Archives
get the latest from
Nonreligious
Sign up for our newsletter
Related posts from Dispatches From the Culture Wars