Christian Tells Us How to Survive Imagined Persecution

Rob Pue is the founder of Wisconsin Christian News and, like most Christian righters, he’s just sure that he’s being persecuted. And he has a column at BarbWire telling his fellow paranoiacs how to survive the current and impending — even worse, of course — persecution to come. And if you’re not being persecuted, you’re just a bad Christian: 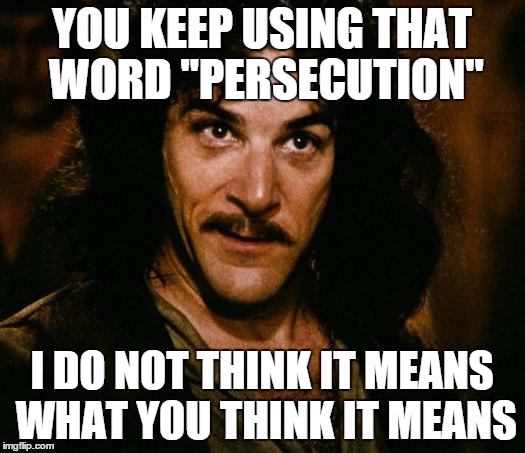 As the new year dawns, we wonder what it will bring. Yes, because we are God’s children, we can rejoice in the hope that we have in our Lord and Savior, Jesus Christ. But we also dread the coming persecution that Scripture clearly tells us IS only going to get worse before that great and terrible day of the LORD. By the way, if you find that in YOUR Christian walk, you are NOT currently enduring some sort of persecution, however large or small it may be, I would examine your heart and ask yourself whether or not you truly ARE a “good and faithful servant,” occupying, standing your ground for HIS Word and Truth, and fighting the enemy daily.

He tends to have a rather broad definition of persecution, however. He clearly thinks it means “not getting whatever I want,” including being able to prevent people from doing things he doesn’t like. Like be gay and stuff. And most of the causes of that imagined persecution are just plain old lies:

No I don’t claim to be a prophet, but I can read the warning signs. Recently, the leaders of France and Germany have urged European Union states to open up borders, allowing for more mass migration. We see how well that has worked in the past for Europe. We now have “no-go zones” in many cities where non-muslims dare not set foot for fear of being raped, beaten or murdered. We’re seeing the same even in the heartland of America, in places like Michigan and Minnesota.

That’s a lie. Here in Michigan, he is of course referring to Dearborn, which is about 40% Arab (which is not the same thing as Muslim; a sizable percentage of them are Chaldeans — Iraqi Christians who have come there for decades). The Christian right have long claimed that it is a Muslim “no-go zone.” That’s absurd. I’ll take you there myself and show you all the liquor stores and strip clubs that could not possibly exist in such a place if that were true. This is just Islamophobic bigotry and lies. And more:

Now the “Progressives,” the “Leftists,” — or I may as well just SAY it: the Socialists — here in America, are crying for a New World Order — a world without borders. Despite our best efforts, thousands of illegals pour over our southern — and northern borders every day. This is not only unsustainable, economically. It’s an invasion. YES, we SHOULD help those who are truly in fear for their lives as they flee socialism and Sharia in their homelands. But in most instances, that is not the case… what IS happening is the invaders are here to force US — the US — into that New World Order, becoming a One World Socialist and Sharia state.

Oh for crying out loud. Even if he were right, Muslim immigration to the United States is a tiny, tiny percentage of immigration. The kind that people like him are freaking out about is Latino immigration from Mexico and Central America, who are overwhelmingly Christian. Welcome to the alternate reality on Planet Wingnuttia, where Christian immigrants are coming to impose Sharia law on us all. And more lies:

In England, Prime Minister Theresa May recently declared that pedophiles should be allowed to adopt children.

Oh for crying out loud, she did not. In fact, she said she wouldn’t even consider it after some academic said they should do that. But in the wingnutosphere, fake news spreads like herpes and, like herpes, never goes away. For people who claim to be so moral, they sure do lie a lot, don’t they?

Those who have come out of the sodomite lifestyle will tell you that pedophilia is the “end-goal” of the LGBT agenda… in fact, many have already added the letter “P” to their LGBT alphabet, because they aren’t even hiding their intentions anymore. They’re coming for our kids. Just look at the 11-year-old “drag queen” in New York known as “Desmond is Amazing,” currently being “pimped out” by his so-called “parents” as he dances, gyrates and performs in homosexual night clubs and “gay bars.” And America cheers him on, encouraged by high-profile celebrities, and appearing on popular TV talk shows. This sort of child abuse will only increase, until pedophilia is accepted, embraced and celebrated. And anyone who dares to suggest it is WRONG will immediately be labeled a “homophobe” and a “hateful bigot.” There’s your persecution, fellow Christian….

No, actually, it isn’t. It’s disagreement. It’s criticism. But you are not harmed in the slightest by it.

We also have ANTIFA; we have one of the two major political parties openly calling for physical attacks on members and supporters of the other party.

Oh, you mean Donald Trump, who did this repeatedly during the 2016 campaign? Then we finally agree on something.

We have seen our history re-written and our historical monuments torn down. We have men “marrying” men and women “marrying” women. We have a push for “three-way marriages,” we have women marching against sexism as they blatantly and disgustingly sexualize THEMSELVES. “Drag Queen Story Time” in public libraries and public schools — with parents eagerly and excitedly taking their children there to embrace the “diversity.” We have Oprah Winfrey promoting the “Shout Your Abortion” movement — where women who have had abortions are encouraged to be proud of that.

See? He really does think that it’s persecution if he doesn’t get what he wants. By that measurement, there is not a single un-persecuted person on the planet. It’s all just so moronic.

January 1, 2019 Former DOJ Officials Slam Trump for Blatant Attack on the Rule of Law
Recent Comments
0 | Leave a Comment
Browse Our Archives
get the latest from
Nonreligious
Sign up for our newsletter
POPULAR AT PATHEOS Nonreligious
1