Dave Chappelle’s legendary sketch about a white supremacist who is black, but is blind and doesn’t know it, has come to life before our very eyes in the person of Jesse Lee Peterson. He has gone on another white supremacist podcast to support their position that white people should be in charge of everything. Seriously. 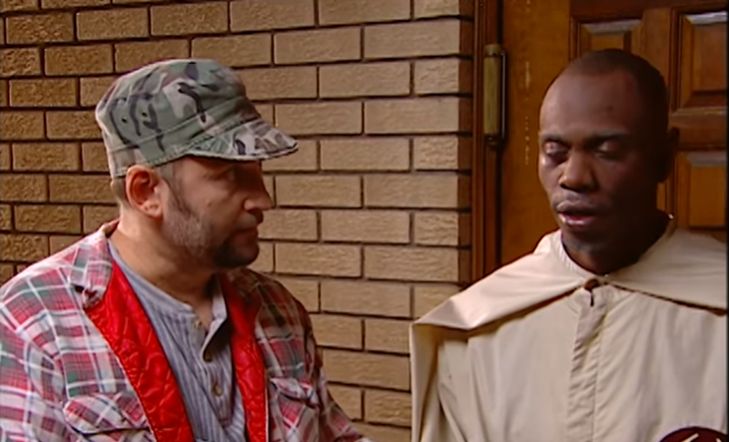 Gariépy and Peterson agreed with the claim that non-white people immigrating into the U.S. is making it harder for white people to live in America, prompting Peterson to assert that the United States needs “to close the back door and the front door in this country and in Europe and clean up the mess and if you decide you want to let people of color in again, maybe you can be real selective—like they did in the good old days—about who you let it.”

“White people need to get married and have a truckload of white children and teach them on the right way to go so they can help save America and Europe because it’s not going to be saved by the people of color and will be destroyed,” Peterson said.

And then…I swear, I’m not making this up:

Flabbergasting, isn’t it? What is there to say about a black man who supports white supremacy? Stockholm syndrome? Internalized racism? Just plain crackpottery? Religious delusion?

January 11, 2019 Coal Plants Shutting Down at Record Pace
Recent Comments
0 | Leave a Comment
"I didn't even think there were free video editing resources, for full-fledged editing, besides actually ..."
James Willey Hey Look, Another ‘Family Values’ Adulterer
"JALY5vN.org"
aditi New Fox Anchor a Q Anon ..."
"Your argument is "Things exist, therefore God," and you just simply believe that there has ..."
Alex Zer0 And Yet Another Stupid Atheist Meme
"Oh hell. Just now got back here. Requiescat in pace, Ed, or just feed the ..."
(((Hornèd Pontilibratificus))) Saying Goodbye for the Last Time
Browse Our Archives
get the latest from
Nonreligious
Sign up for our newsletter
POPULAR AT PATHEOS Nonreligious
1

Russell Moore and the Leaked Letters:...
Roll to Disbelieve
Related posts from Dispatches From the Culture Wars