Trump, Jr. Won’t Stop Hitting Himself in the Face

Donald Trump, Jr. is the gift that keeps on giving. Over and over again he scores own-goals on himself and embarrasses himself publicly, much to my amusing. His latest attempt to attack Democratic women in Congress was a spectacular fail on every conceivable level. 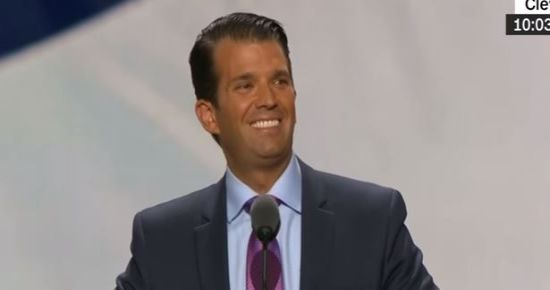 Speaks for itself and no one is at all surprised. pic.twitter.com/kLoJzMmY10

First, the utter stupidity that wearing a pin makes one a patriot is bad enough. But let’s add in some blatant hypocrisy as well:

Also, this is so true-to-form. @DonaldJTrumpJr has one of the greatest self-owns of the year pic.twitter.com/THxhyrQBU3

Speaks for itself, doesn’t it?

February 7, 2019 Shocker! Trump Lied Throughout SOTU Speech
Recent Comments
0 | Leave a Comment
"OnlySky is now live: https://onlysky.media/I am adding Ed to my OnlySky authors shortcuts folder so ..."
Thomas Fitzpatrick Saying Goodbye for the Last Time
"Hi ,for anyone wanting to follow the friendly atheist on Onlysky, it will go live ..."
david coxill Saying Goodbye for the Last Time
"Oh yes.. The privilege of being called names by people who have zero understanding what ..."
Standingbear Gallups: Satan Has Convinced Christians They ..."
"I wouldn't mind idiots saying "Black Lives Matter" IF They Meant it.Clearly that is not ..."
Standingbear Gallups: Satan Has Convinced Christians They ..."
Browse Our Archives
get the latest from
Nonreligious
Sign up for our newsletter
Related posts from Dispatches From the Culture Wars