A New Candidate for the Antichrist: Jared Kushner

There are few things more amusing than listening to wingnuts determine who the real Antichrist is and we have a new candidate for the title: Jared Kushner. Far-right conspiracy nut Steve Quayle — no relation that I know of — says that God has revealed to him that Kushner fits the bill. 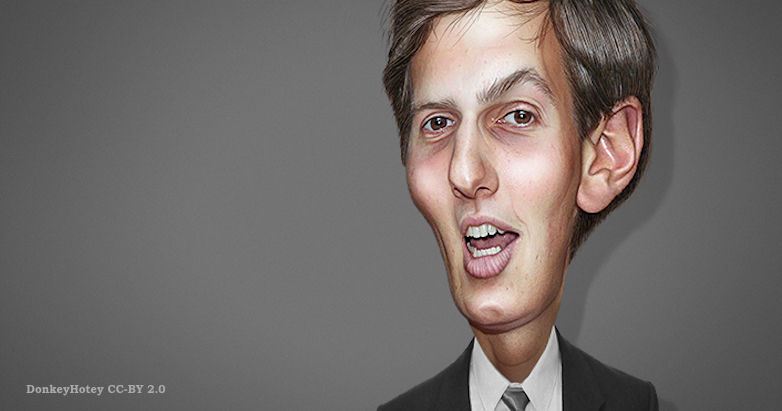 “The other night, I just heard this in my spirit,” Quayle said. “Here’s what dropped into my spirit, I’ve never thought of this in my life so all I can say is something is going on here, that Jared [in the Bible] was the patriarch, the second oldest man in the Old Testament, when the fallen angels fell on Mount Hermon—that’s in the Book of Enoch, chapter six, and it’s also in Jubilees, it’s referred to.”

“Now, what’s important is that Enoch was the seventh from Adam and so what we’re seeing here is we’ve got some unusual things,” he continued. “We’ve got the seventh from Adam—and I believe Enoch is one of the two witnesses and this has everything to do with what we’re talking about—that Jared Kusher, the man of peace behind the scenes, is absolutely the prime candidate, I believe, for the A.C., the Antichrist.”

“Here’s why,” Quayle said. “The spirit, in my opinion, the Bible talks specifically of Antichrist, the literal devil, entering into him, just like he did Judas Iscariot. But what’s even more important, Jared Kushner’s address is 666 5th Avenue … If you take New York, and I do, as the commercial center of commercial Babylon, then what you’ve got is you’ve got someone whose name links with the time of the fallen angels—and it’s my position that the earthly kings, so many of them are fallen angels, if you will, in human drag, that’s really the only way I know how to say it—and the thing that is really critical is that it’s imperative that people understand that there’s a lot in a name. Because the name Jared, and that’s what’s interesting, means ‘descent’ or ‘descendant.’”

“We’ve got the president, who is doing everything that he believes is right to do,” Quayle declared, “but his physical descendant is married to what could turn out to be one of the most villainous men in the world.”

Well there ya go. We’ll add Kushner to the long list of potential Antichrists that God has identified to one “prophet” or another. None of them have been right so far, of course, so I’ll ask the obvious question: Are these people just completely full of crap? Or is God messing with them, giving different answers to different people? I kind of like the latter idea, a trickster God playing games with crackpots.

It reminds me of the old Sam Kinison routine about God waking Pat Robertson up in the middle of the night and telling him to go check his tire pressure.

February 26, 2019
Newspaper That Published Pro-KKK Article Taken Over by Black Woman
Next Post

February 26, 2019 Bakker: Trump Has Been 'Saved So Many Times'
Recent Comments
0 | Leave a Comment
Browse Our Archives
get the latest from
Nonreligious
Sign up for our newsletter
POPULAR AT PATHEOS Nonreligious
1