More of that Convenient and Hypocritical ‘Religious Freedom’

With the Trump administration pushing for religious exemptions from all manner of laws, including requirements that a medical professional treat a patient, and the Christian right cheering them on and screaming about “religious freedom,” you’d think the Robert Jeffress’ and Jerry Falwell Jr’s of the world would be upset about this policy. They’re not.

A man is about to go on trial and faces up to 20 years in prison for the “crime” of giving food and water to immigrants suffering at the border. Like many people and the groups they work with, they are Christian and view it was a religious duty to do as Jesus instructed them to do, feed the hungry, heal the sick and so forth. This is part of the Trump administration’s “zero tolerance” policy that punishes even those who give humanitarian aid to those in dire need.

Warren encountered Kristen Perez-Villanueva and José Arnaldo Sacaria-Goday in the 860,000-acre Cabeza Prieta National Wildlife Refuge, where the two had lost their backpacks containing food and water while being chased by border agents. Traversing the desert without food or water can be deadly. According to the Pima county medical examiner, 2,615 human remains were recovered between 2001 and 2016. Warren discovered 18 of those bodies.

What makes this land “sacred,” as Warren calls it, is the death of migrants upon it. According to Ryan Devereaux’s exhaustive account published by the Intercept earlier this month, Warren testified that “The entire desert is a sacred place. It’s a graveyard.” For Warren, leaving water becomes a religious act of remembrance and solidarity, of being presente. Not wanting Perez-Villanueva or Sacaria-Goday to join the list of what the Border Patrol considers “collateral damage,” he brought them to “the Barn,” a small building in Ajo, Arizona, used by No More Deaths, to provide them with food, water, beds, and clean clothes. This is where he was arrested on April 17, 2018, and charged with two felony counts.

I too am guilty of the same “crime” Warren committed, for I, along with thousands of other volunteers over the past decades, have walked the migrant trails bringing food, water, clothes, and medical supplies. Like Warren, I was once detained for harboring two migrants among us, though I was neither arrested nor charged. Many of us who commit the same “crime” as Warren do so as an act of fidelity to the Gospel of Matthew 25. By the praxis committed by Warren, myself, and thousands of volunteers, we define our humanity and our faith with every jug of water, can of beans, article of clothing, or box of bandages we leave on these trails of terror where thousands have horribly died, most from dehydration.

So tell me, Mr. Trump, why does this not violate their religious freedom by punishing them for following the tenets of their faith, as you claim it does when a doctor has to treat a gay patient or a bakery has to make a cake for a gay wedding? Seems like it’s only “religious freedom” when it protects their right to be cruel and discriminatory, not to be kind and compassionate.

Now let me be clear that I think religious beliefs should be totally irrelevant in both cases. I don’t think one’s religious beliefs should get you a “get out of jail free” card that allows you to ignore the laws the rest of us have to follow. In fact, I think such exemptions are unconstitutional. But if you’re going to scream about religious freedom using the kind of broad rhetoric the Christian right uses, why do they apply it hypocritically only to their bigotry and not their humanity? 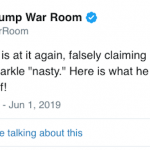