South Dakota has a new law requiring all public schools to post “In God We Trust” on the walls of the school in at least one foot tall letters. They claim, of course, that it’s all okay because it’s the national motto and it’s really all about history, not religion. And if you believe that, I’ve got some land owned by white supremacists in Idaho to sell you. 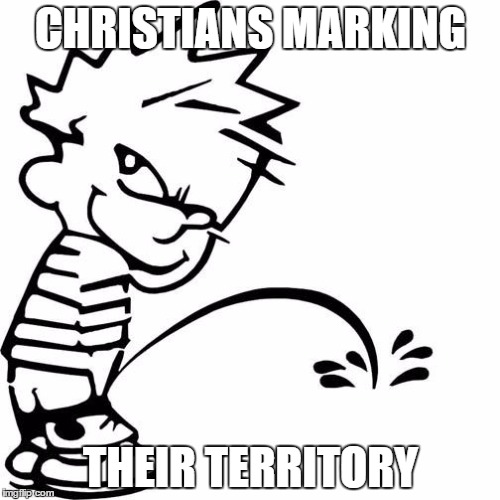 South Dakota’s Republican lawmakers said it was about history — the motto appears on money, on license plates and in the fourth stanza of “The Star-Spangled Banner.” It’s also likely to be discussed in the classroom, where historical inquiry is a key part of the state’s social studies curriculum.

But legislators said they wanted to make it more clear; they wanted to “reaffirm” it. So this fall, when students return to school, a new and compulsory message will greet them: “In God We Trust.” It’ll be the first new academic year since South Dakota’s GOP leadership passed a law requiring every public school to display the American maxim “in a prominent location” and in a font no smaller than 12 by 12 inches.

South Dakota joins a growing list of states that force their schools to display the motto. At least half a dozen passed “In God We Trust” bills last year, and 10 more have introduced or passed the legislation so far in 2019. Similar signage is going up in Kentucky schools this summer, and Missouri could be next.

Opponents of these laws contend that the statute is about far more than history. They have argued that its invocation of “God” is an endorsement of religion and a violation of the First Amendment.

And it is exactly that, of course, but the Supreme Court continues to allow that to be the national motto because it’s “ceremonial deism” that has been in place for a long time — though not as long as the ignorant advocates of such laws claim.

Republican state Sen. Phil Jensen, the controversial Rapid City politician who sponsored the bill, conceded it was informed by religion.

“Let’s keep hope alive,” he said, after quoting Ronald Reagan and Chuck Norris on the merits of a God-fearing country. “This is our legislature, our history, a nation that trusts God.”

Time for Jensen to go back to school. The motto began in the eaerly 1950s, not the time of the founding, and it was never proposed as a national motto by any of the founders. It was put in place by a legislature sowing fear about the “red scare” of communism and they replaced the motto the founders came up with — E Pluribus Unum, or out of many, one — with the new motto too distinguish us from those evil godless commies. And guess what? “Nations” can’t trust anything, only people can. And this is country where millions do not trust in a god they don’t believe in and tens of millions more believe in different gods.

And that’s what really motivates this kind of legislation. Christians are afraid they are losing their long-held hegemony over the country because we have become far more religiously diverse, so they are marking their territory against the invading horde of non-Christians (ironically, the Latino immigrants they’re trying so hard to keep out are almost all Christians).

July 29, 2019
Kushner is a Slumlord in Baltimore
Next Post