You knew this was but it’s good to see Senate Majority Leader Mitch McConnell come right out and admit it. In an interview with Hugh Hewitt, McConnell said that if there was a vacancy on the Supreme Court during 2020, he was “absolutely” fill that position, a total reversal from when he prevented Merrick Garland from even getting a committee hearing in 2016. 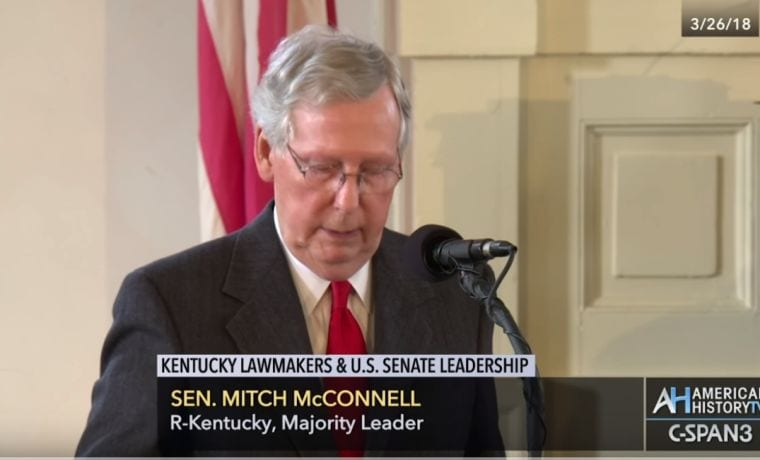 Senate Majority Leader Mitch McConnell (R-Ky.) pledged Tuesday that Republicans would fill a Supreme Court vacancy in 2019 or 2020, arguing the dynamic is different now than when the party held open a seat in 2016.

Asked during an interview with radio host Hugh Hewitt if Republicans would support filing a vacancy on the Supreme Court in 2019 or 2020, McConnell said “absolutely.”…

“There was nothing I did that was, would not have been done had the shoe been on the other foot had there been a … Republican president and a Democratic Senate. So look, they can whine about this all day long. But under the Constitution, there is co-responsibility for appointments,” McConnell added.

Did that Constitutional co-responsibility just magically appear now? Did it not exist in 2016? He isn’t even attempting to cover up what is nothing more than shameless hypocrisy. And I mean literally that the man has no shame. He will do or say anything that is to the Republicans’ partisan advantage and he’s basically telling the country to go to hell, he’ll do whatever he wants. We’re used to partisan hypocrisy from politicians, but this is so blatant and obvious that it almost defies belief — except that it was entirely predictable. Could anyone possibly have doubted that he would do this? You would have gone broke betting against that happening.