In 2017, after racist Maricopa County, Arizona Sheriff Joe Arpaio was convicted of criminal contempt of court for refusing to comply with a court order to stop racial profiling by his deputies, Trump pardoned him. Arpaio then asked that the conviction itself be voided from the record and the judge denied that request. An appeals court has now upheld that decision. 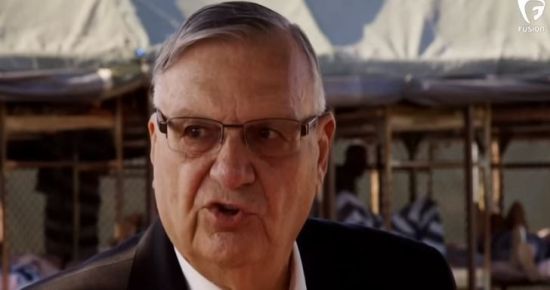 In July, 2017, a federal judge found the longtime Maricopa County, Ariz. sheriff and immigration hard-liner guilty of contempt for defying another judge’s ruling aimed at halting racial and ethnic profiling by Arpaio’s department.

The following month, before Arpaio was scheduled to be sentenced, Trump pardoned him. The president cited Arpaio’s age at the time, 85, and his long record of “selfless public service.” Echoing one of Trump’s favorite phrases, Arpaio declared himself the victim of a “witch hunt.”

The pardon meant Arpaio would never be sent to jail, but when he asked U.S. District Court Judge Susan Bolton to withdraw the guilty verdict in the case, she declined. The pardon could not rewrite history, she declared.

Arpaio appealed the ruling, arguing that the pardon entitled him to have the guilty verdict formally vacated. The three-judge appeals court panel, all of whom are Republican appointees, turned down that request. But Arpaio’s attorneys declared victory anyway because the court opinion emphasized that the guilty finding has no legal consequences.

Ah, the Trump tactic — lose the battle but declare yourself the winner anyway. Because you’re a winner and winners can’t lose, so if they do lose it’s really a victory.

Dr. Fauci Fired And Replaced By...
Laughing in Disbelief

Nonreligious
Originalism vs Originalism: Gorsuch and Thomas
Dispatches From the Culture Wars