Q Anon crackpot Kelly Ruiz has analyzed the 2012 Olympic Opening Ceremony and determined that it was designed to prepare people for the coronavirus. Specifically, it prepared us to accept vaccines, which I’m’ sure are a big conspiracy to depopulate the globe. Bill Gates is no doubt behind the entire thing. 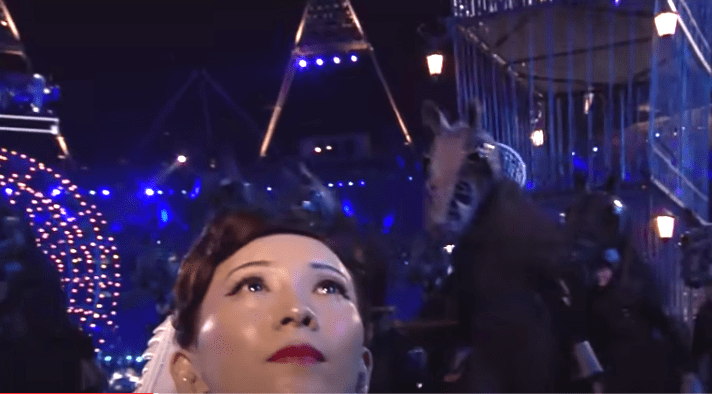 But Ruiz, whom Steel claimed was a “former 2016 Trump campaign Florida team leader,” insisted that this segment of the opening ceremony was really a “mind control” program aimed at preparing the world to accept a coronavirus vaccine.

“I don’t know if you saw the 2012 opening ceremony to the Olympics in Britain, but basically that’s all on coronavirus,” she said. “They were predicatively programming us to be able to accept this.”

“It was ironic when you see the video—and I saw it this past weekend—I was shocked because literally they had all these children, probably at least 100 children in beds with nurses pushing them around, and a virus is coming at them,” Ruiz continued. “The kids are hiding under the blankets, and then this big, giant monster, this evil, dark figure starts coming also after the children. And they even [have] like a cage, a cage comes through with horses, and it’s Wuhan, it’s literally like a Chinese, there’s a lady that’s Asian standing in front.”

“They were really programming us, which they do,” she concluded. “And that’s what they’re doing right now with the vaccines.”

These are the kind of people who see dark symbolism in the Super Bowl halftime show.

May 6, 2020 Lively: Christians Must Prepare for Coming Persecution, Violent Revolution
Recent Comments
0 | Leave a Comment
Browse Our Archives
get the latest from
Nonreligious
Sign up for our newsletter
POPULAR AT PATHEOS Nonreligious
1