Three historical and religiously important mosques – dedicated to Abu Bakr, Umar and to the place where Mohammad offered his first prayers for Eid – Masjid Ghamama – are being bull-dozed.

Do you see any burning of flags?  How about killing of the Ambassadors of the country doing it?  At least a few riots would surely be appropriate?

I mean three of the most historic mosques will be razed to the ground, and gone .. poof!  Yet the Muslim world is quiet and happy.  Because its the Saudi Arabia Government which is doing it.

So it depends.  huh!  This is being done to expand Masjid an-Nabawi in Medina.  The capacity of the new building will be 1.6 mn people.

The fact is that Islam is merely a tool in the hands of the Arabs to perpetuate Arab colonialism over other converts.  The beginning and sustenance of Jihad and extremism and entire web of Madrasas along with their “Fatwa supply chain” is financed and sponsored by the Arabs.  It stands them well.  They have money – for which they have done nothing – and they have the sites to a religion which is high on belief and large on conversion.  Also, deadly on apostasy.  So a continuous supply of slave labor is assured.

Some Muslims are talking about it, but these voices aren’t many.

“No one denies that Medina is in need of expansion, but it’s the way the authorities are going about it which is so worrying,” says Dr Irfan al-Alawi of the Islamic Heritage Research Foundation. “There are ways they could expand which would either avoid or preserve the ancient Islamic sites but instead they want to knock it all down.” Dr Alawi has spent much of the past 10 years trying to highlight the destruction of early Islamic sites.

One remembers the hue and cry on the bringing down of the Babri “Masjid” – for it was more of a victory monument built by Invader Babar on one of the oldest Hindu temple to seal his victory and unleashing of death on thousands of survivors by this barbarian.  Yet, that structure – which only sick people can call a “place of worship” – was held so important that many thousands died in the aftermath.

But the Islamic world is disappointing us this time.  We need “Red” guys.  At least a few riots and protests, please! 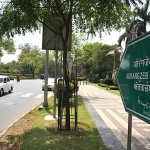