Sam Harris and the Myth of Perfectly Rational Thought

Sam Harris and the Myth of Perfectly Rational Thought May 22, 2018 Shem the Penman

If we were biased, we’d notice it, right? 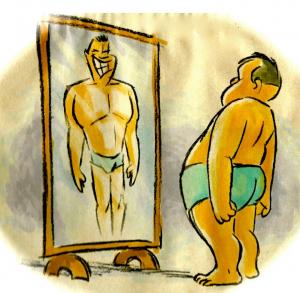 In the latest issue of Wired, author Robert Wright expresses his amusement at how Sam Harris characterizes his recent debate with Ezra Klein. Though a more circumspect thinker would at least admit that Klein had zeroed in on a few of his most glaring weaknesses in the discussion, the hilariously self-serving Harris appeared on Joe Rogan’s radio show and crowed about the difference between his approach and Klein’s: he claimed that, while Klein and his ilk are blinded by identity politics, Harris and his disciples maintain a preternaturally rational equanimity. Wright explains:

Not only is Harris capable of transcending tribalism—so is his tribe! Reflecting on his debate with Klein, Harris said that his own followers care “massively about following the logic of a conversation” and probe his arguments for signs of weakness, whereas Klein’s followers have more primitive concerns: “Are you making political points that are massaging the outraged parts of our brains? Do you have your hands on our amygdala and are you pushing the right buttons?”

Of the various things that critics of the New Atheists find annoying about them—and here I speak from personal experience—this ranks near the top: the air of rationalist superiority they often exude. Whereas the great mass of humankind remains mired in pernicious forms of illogical thought—chief among them, of course, religion—people like Sam Harris beckon from above: All of us, if we will just transcend our raw emotions and rank superstitions, can be like him, even if precious few of us are now.

Is Harris just seeing what he wants to see in the mirror? Are we?

The Tribe has Spoken

Wright points out that Harris appears just as prone to intellectual laziness and tribalism as any of the people he criticizes. His rationality wasn’t exactly on full display when he invited “race realist” Charles Murray on his podcast for a cozy chat in which Harris dismissed the criticism of Murray’s shoddy work as a “politically correct moral panic.” What could be more tribal than handwaving away the copious methodological and statistical issues with The Bell Curve as deriving not from completely warranted skepticism but from ideologically-motivated outrage?

Since then, you may have noticed, the phrase “politically correct moral panic” has become Harris’s boilerplate response to controversies ranging from the Evergreen College brouhaha to the allegations of sexual misconduct against Lawrence Krauss. If it doesn’t seem particularly reasonable to frame every matter as a battle between rational agents on one side and hysterical crybabies on the other, it’s even less reasonable to do so while still claiming that one is absolutely above tribalism.

Wright then points out that Harris’s claims, quite apart from their divisiveness, demonstrate only the trappings of rationality itself. He notes that Harris initially made his name in the wake of 9/11 by blaming Islam for terror:

Believing that the root of terrorism is religion requires ruling out other root causes, so Harris set about doing that. In his book he listed such posited causes as “the Israeli occupation of the West Bank and Gaza…the collusion of Western powers with corrupt dictatorships…the endemic poverty and lack of economic opportunity that now plague the Arab world.”

Then he dismissed them. He wrote that “we can ignore all of these things—or treat them only to place them safely on the shelf—because the world is filled with poor, uneducated, and exploited peoples who do not commit acts of terrorism, indeed who would never commit terrorism of the sort that has become so commonplace among Muslims.”

If you’re tempted to find this argument persuasive, I recommend that you first take a look at a different instance of the same logic. Suppose I said, “We can ignore the claim that smoking causes lung cancer because the world is full of people who smoke and don’t get lung cancer.” You’d spot the fallacy right away: Maybe smoking causes lung cancer under some circumstances but not others; maybe there are multiple causal factors—all necessary, but none sufficient—that, when they coincide, exert decisive causal force.

Or, to put Harris’s fallacy in a form that he would definitely recognize: Religion can’t be a cause of terrorism, because the world is full of religious people who aren’t terrorists.

Harris isn’t stupid. So when he commits a logical error this glaring—and when he rests a good chunk of his world view on the error—it’s hard to escape the conclusion that something has biased his cognition.

It might not seem like it, but Wright is giving Harris a great deal of credit here. He’s not accusing him of being a mendacious ideologue taking advantage of the credulity and intellectual shortcomings of his audience. He’s accusing Harris of having the same biases he has made a living out of criticizing in others.

The Self Image We Deserve

There’s an old saying: We hate others because we recognize their flaws, while others hate us because they resent our virtues.

If we’re really critical thinkers, we can’t just scrutinize the beliefs of others; we have to be careful that our own thinking isn’t riddled with prejudice and intellectual laziness. The more people spout affirmations like Belief is easy but thinking is hard, the louder my skeptic alarm rings. Are we focusing on other people’s fallacious reasoning so we don’t have to admit the problems with our own mindset? Do we live up to our motto Question Everything if we never question the things we believe about knowledge, science, and society?

It could be that we’ve just traded religious faith for bad faith, and that’s not much of an improvement. 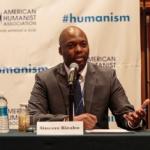 May 16, 2018
Social Justice Coordinator at The American Humanist Association Resigns
Next Post 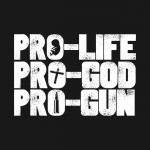 May 25, 2018 Pro-Life Is About Oppressing Women. That's All.
Recent Comments
45 Comments | Leave a Comment
Browse Our Archives
get the latest from
Nonreligious
Sign up for our newsletter
POPULAR AT PATHEOS Nonreligious
1

The Flocks Still Don't Like Evangelism:...
Roll to Disbelieve
Related posts from Driven to Abstraction