Dinosaurs, Dissent, and the Nastiest Feud in Science

Dinosaurs, Dissent, and the Nastiest Feud in Science August 14, 2018 Shem the Penman

The scientific consensus on what happened to the dinosaurs is going the way of the dinosaur! 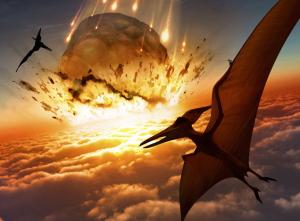 For decades now, the scientific consensus has been that the dinosaurs died out 66 million years ago when an asteroid struck the Earth. The Atlantic just published an article called “The Nastiest Feud in Science” that interviews some of the dissenters from that consensus. For all I know, the article may be overstating the significance of the challenge from proponents of the theory that volcanic activity was responsible for the mass extinction. However, the story of how the “impacters” established and maintain their dominance should be an eye-opener for people who think science is all about the “evidence.” In fact, there are plenty of cultural, professional, and personal issues that shape the debate.

The facts should be familiar to any science fan: physicist Luis Alvarez discovered the iridium layer at the Cretaceous–Paleogene boundary, and published a paper in 1980 in which he concluded that the worldwide stratum was formed by an asteroid impact whose aftermath destroyed the dinosaurs. Ten years later, researchers pinpointed the impact at the Chicxulub crater in Mexico.

The impact theory provided an elegant solution to a prehistoric puzzle, and its steady march from hypothesis to fact offered a heartwarming story about the integrity of the scientific method. “This is nearly as close to a certainty as one can get in science,” a planetary-science professor told Time magazine in an article on the crater’s discovery. In the years since, impacters say they have come even closer to total certainty. “I would argue that the hypothesis has reached the level of the evolution hypothesis,” says Sean Gulick, a research professor at the University of Texas at Austin who studies the Chicxulub crater. “We have it nailed down, the case is closed,” Buck Sharpton, a geologist and scientist emeritus at the Lunar and Planetary Institute, has said.

But [Princeton paleontology and geology professor Gerta] Keller doesn’t buy any of it. “It’s like a fairy tale: ‘Big rock from sky hits the dinosaurs, and boom they go.’ And it has all the aspects of a really nice story,” she said. “It’s just not true.”

The consensus formed quickly and confidently for a lot of reasons that had little to do with “evidence.” Alvarez was a Nobel Prize-winning physicist who was an important contributor to the Manhattan Project, and had witnessed the Hiroshima detonation personally. His stamp of approval on a proposal carried a lot of weight in scientific circles.

Physics chauvinism reinforced the idea that Alvarez had gotten it right, since the main source of opposition to the impact theory was earth scientists such as geologists and paleontologists. According to the article, Alvarez was cruelly dismissive of these researchers. “I don’t like to say bad things about paleontologists, but they’re really not very good scientists,” was how Alvarez expressed his disdain for his critics in an interview with The New York Times. “They’re more like stamp collectors.” His attitude was one of arrogance and presumption, not to mention anger at having mere rock-chippers question his mathematical, macho physics know-how.

Futility, Thy Name is Woman

It also didn’t help that the main voice of dissent was a woman. Gerta Keller couldn’t muster up enough support to make a difference, especially among scientists understandably worried about the consequences for their careers and reputations should they come out publicly in support of a vociferous woman whose views ran counter to the prominent and accomplished male scientific elite.

Science has a long track record of excluding and marginalizing women and de-emphasizing their accomplishments. Even today, women are targets of harassment and bias in scientific fields. According to Keller, she has been subject to insults and threats for her vocal opposition to the impacters.

The article describes the debate between the impacters and the volcanists not as the sort of dialogue between open-minded professionals that the believers in “bias-eliminating,” “self-correcting” science like to think is prevalent in the history of scientific inquiry, but as an acrimonious mudslinging match between rivals who refuse to give an inch.

The matter of “evidence” seems largely beside the point, since each camp denies that the facts marshaled by the other camp even constitute evidence at all:

The greatest area of consensus between the volcanists and the impacters seems to be on what insults to sling. Both sides accuse the other of ignoring data. Keller says that her pro-impact colleagues “will not listen or discuss evidence that is contrary to what they believe”; Alan Hildebrand, a prominent impacter, says Keller “doesn’t look at all the evidence.” Each side dismisses the other as unscientific: “It’s not science. It sometimes seems to border on religious fervor, basically,” says Keller, whose work Smit calls “barely scientific.” Both sides contend that the other is so stubborn, the debate will be resolved only when the opposition croaks.

The Death Star vs. The Flintstones

Of course, it can’t be gainsaid that in 1980, a theory that speculated that threats from space caused the demise of the charismatic megafauna had popular appeal far beyond its scientific merit. In the age of Star Wars, the impacters appeared to be serving up something so tailored to public acceptance it bordered on pandering.

However, let’s not overlook the fact that what the asteroid-impact theory says about extinction is also something we prefer to believe: that it’s sudden, random, and totally unanticipated. Keller’s theory about massive volcanic activity in the Deccan Traps of western India involves a broader time frame than the asteroid-strike theory, and perhaps we—as arguably the dominant species on Earth today, and filling the atmosphere with the same deadly chemicals that the volcanists claim killed the dinsosaurs—don’t want to think of mass extinction as something we could ever deny is happening. In the era of anthropogenic global warming, it may be more comforting to think that our mass extinction will be sudden and inexorable.

What do you think? Is there truly a debate about the demise of the dinosaurs, or is the case closed? Is evidence truly the sole relevant factor in establishing scientific consensus, or are there cultural and professional aspects to the unanimity of opinion in scientific circles? 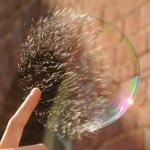 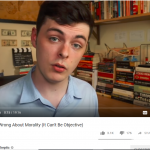 August 16, 2018 Morality Isn't Subjective, No Matter What Cosmic Skeptic Says
Recent Comments
80 Comments | Leave a Comment
Browse Our Archives
get the latest from
Nonreligious
Sign up for our newsletter
POPULAR AT PATHEOS Nonreligious
1

Pastor left puzzled as to why...
The Freethinker
Related posts from Driven to Abstraction