Pope Francis gets it.

The last few hours have seen waves of reaction to the election of Jorge Mario Cardinal Bergoglio to the papacy.  It started with, “Huh? Who’s that?” It quickly moved on, as GetReligion pointedly mocks, to the fact that Bergoglio is from the New World, that he lives an austere lifestyle (taking public transportation, living downtown, cooking his own meals), and that he champions the poor over against unbridled global capitalism. It’s moved on now to his sexual conservatism on abortion, contraception, and gay rights, and now there seems to be a lively debate between the moderates (“You can’t pin Pope Francis down as a conservative!”) and the progressives (“But he said that same-sex marriage comes from the Father of Lies!”).

Meanwhile, Catholics in the know have been remarking on the remarkable name of “Francis.” Some say this is a reference to St. Francis of Assisi to whom God told to “build his church.” Others see this as a reference to St. Francis Xavier, the first missionary–and a Jesuit–to Asia. Still others are remarking on how it’s so cool to have a first Jesuit pope and how even cooler still he took a Franciscan name. (Jesuits and Franciscans have a rivalry of sorts.)

Nobody has pointed out how remarkable that first speech is.

OK, maybe I’m overreaching. Yes, yes, everyone is saying how remarkably humble it is that he had the people say a prayer for him before he blessed them and how St. Peter’s Square went so quiet that you could hear a pin drop.

Few note that he didn’t call himself “pope.” He called himself “the bishop.”

Pope Francis gets that he is the Bishop of Rome. He refers to “the evangelization of this beautiful city.”  He tells the people gathered in the square that they should pray for him as their “bishop.” He tells them that tomorrow, he’ll “pray to the Madonna, that she may protect Rome.” He opens his speech by saying that the conclave’s duty was to “give a bishop to Rome,” joking that for some reason, the cardinals had to go to “almost to the ends of the earth” to get him.

In short, Pope Francis sees himself as the Bishop of Rome.

In so doing, Pope Francis tells us what the papacy is about. Despite the pronouncements of the First Vatican Council on papal infallibility, he doesn’t say that it’s the Holy Father who presides as the supreme authority over the Roman Catholic Church. It is this:

Pope Francis recognizes that this statement sounds almost ludicrous. After all, what gives the church of Rome that right to preside? The new pope’s shy smile might give us a hint. Nothing, he might say. The fact that Rome itself needs to be evangelized is Exhibit A.

By doing this, Pope Francis is returning to a very ancient Christian tradition. In that tradition, it’s the church at Rome that appeals for Christian unity. You see this in St. Paul’s letter to the Romans and its appeal for Jewish-Christian goodwill (see the work of Mark Nanos for details). You see this in the First Letter of St. Clement of Rome to the Corinthians: there, it’s again the church of Rome appealing to the church of Corinth to stop their infighting and become united. The blessing of church unity begins at Rome, the bishop with the people and the people with the bishop. That blessing then goes out “to the whole word, to men and women of good will.”

Pope Francis is trying to show the world what the church is by re-visiting what the church of the city of Rome is supposed to be about. Habemus Papam. Because we really have a pope. 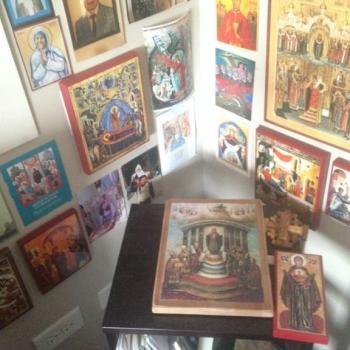