Mark Driscoll has broken his silence. Embedded in a statement released by Tyndale House publishers and circulated via The Christian Post, Driscoll has now clarified his plagiarism situation. On the heels of allegations that he plagiarized from D.A. Carson’s (actually, David H. Wheaton’s) 1 and 2 Peter commentary from InterVarsity Press (IVP), Driscoll now admits that sales on Logos Bible Software has earned Mars Hill Church $236.35 in profits before the book was pulled off the market. Without naming Carson, Wheaton, or IVP, Driscoll says now that he has contacted an ‘editor’:

Also, I personally contacted one of the editors of the work that was not rightly attributed. Thankfully, he and I have a longstanding relationship, which includes him teaching at Mars Hill and publishing a book with us through Resurgence. He’s a godly man who has been very gracious through all of this. I am deeply thankful for his acceptance of my apology, as I deeply grieve this mistake with a brother in Christ whom I appreciate very much.

As for the plagiarism allegations from Peter Jones’s book, Tyndale House stands by its statement that A Call to Resurgence conforms to market standards.

This statement has been contextualized by Religion News Service’s Jonathan Merritt, who has embedded these claims within the larger context of the mysterious practices of revisionism performed on the public record throughout this ordeal. As we have come to expect from Religion News Service through the fine craft of writers like David Gibson, Sarah Pulliam Bailey, and Jonathan Merritt, the post covers all sides of the evangelical contestations. It reiterates the story of how The Janet Mefferd Show’s plagiarism allegations mushroomed and then imploded. It covers a range of critiques of Driscoll, including the most recent one published by Jared Wilson from within the neo-Reformed camp. And it suggestively laments the fickleness of public attention on this issue:

But in recent days, outrage over the allegations have begun to cool. Fewer and fewer people have been discussing the matter on social media and online publications. So why has the Seattle pastor waited until now to address these issues when much speculation and hoopla might otherwise have been avoided? It’s difficult to say. One can only hope that Driscoll, a perpetual lightning rod of controversy, will indeed learn from this fiasco. And perhaps all of us who are involved in Christian publishing–if we’ll humble ourselves and reflect–will too.

In other words, the story appears to be over. The final statements are out. The putative ‘speculation’ must end.

As with the Asian American open letter to the evangelical church, however, I’d like to suggest that the larger narrative behind this whole story is far from over. This is because with these statements, Mark Driscoll and Tyndale House Publishers are attempting to reinforce the private consensus. Even when this story will have been thought to be relegated to the dustbin of evangelicalism, the drama of such ideological construction will continue to be fascinating to watch.

The ideological moves in this particular statement from Tyndale House are fascinating because they appeal to the ‘biblical’ basis of Driscoll’s actions. Driscoll makes the moves first by suggesting that as a ‘Bible teacher,’ he is embarrassed. He thus contacted the editor of InterVarsity Press for a personal chat. As readers will recall, InterVarsity Press had previously publicly demanded an explanation of the citation irregularities in the 1 and 2 Peter study guide, and public commentary on the situation had revealed that the guide had been sold for profit on Logos Bible Software. After resolving the situation privately, a spokesperson for Tyndale House Publishers has now gone on record saying:

Because of the biblical manner in which Pastor Driscoll has handled this situation, Tyndale strongly stands behind him and looks forward to publishing many additional books with him. Tyndale believes that Mark Driscoll has provided a significant call to Christians to unite together in translating the message of Jesus faithfully to a post-Christian culture, to proclaim clearly, loudly, and unashamedly the Good News of Jesus. (emphasis mine)

Note well what is ‘biblical’ about these steps. Instead of answering the public inquiries into these plagiarism charges, Driscoll privately approached InterVarsity. He and his church took the necessary steps that were privately recommended. An ‘internal’ elder board and an ‘external’ accountability group has overseen these changes, also privately, outside of public scrutiny. There were some gaffes made in that process that were also caught by the public, but these too were privately resolved, now with Driscoll even publicly totaling up the meager profits made on the Logos site. It is these actions in turn that are now being commended by Tyndale House as ‘biblical.‘

It turns out that what is biblical about the ‘manner in which Pastor Driscoll has handled the situation’ is that he has facilitated Tyndale House’s coordination of a retreat of an item of public conversation back into the private sphere. No wonder ‘outrage’ has cooled, then. No surprise that ‘fewer and fewer people’ are discussing the matter. The private consensus has exerted its force over public discourse.

First, instead of offering a substantive rebuttal to the allegations that Peter Jones’s work was plagiarized, what we get instead is an analysis of Driscoll’s private intentions in relation to Peter Jones. Note well what the statement says: plagiarism is not a matter of practice; it is a matter of intention, that is, ‘plagiarism is a writer’s deliberate use of someone’s words or ideas, and claiming them as their own with no intent to provide credit to the original source’ (emphasis mine). Because Driscoll has invited Peter Jones to speak and write for the Resurgence (i.e. ‘to publicly express himself to a larger audience’), Tyndale thus ‘rejects the claims that Mark Driscoll tried to take Peter Jones’s ideas and claim them as his own.’ In other words, A Call to Resurgence conforms to market standards not because of what is written, but what is privately intended. Despite the evidence that Janet Mefferd put on her site, that was removed, but that is still in circulation, then, what is published–that is, public practice–does not matter. Private intentions, and private intentions alone, matter.

Second, instead of settling the issue of plagiarism publicly where it began (including with InterVarsity Press’s editor), Driscoll takes a ‘personal’ (read: private) approach in which all is settled behind closed doors and then reported to the public. What is fascinating about this move was that InterVarsity’s complaint about ‘citation errors’ was a public one. But what started public did not stay public. Driscoll took everything out of the public sphere and into private circles. Tyndale House then commends this geographical shift for being ‘biblical.’

The result here is that the biblical, the personal, and the private have become ideologically conflated, at least in these evangelical circles. What starts public, in other words, must not stay public because staying public is becoming implicitly–and ideologically–labeled ‘unbiblical.’

The trouble is that this particular reading of the biblical comes out of the private consensus. As it is, what is troubling about such iterations of the private consensus is that they have political implications that go outside of the scope of this case and reach beyond the borders of American evangelicalism. After all, these moves perform an implicit ethical framework. To call these privatizing moves ‘biblical’ is to endorse such practices as the modus operandi of evangelicalism. In other words, it is biblical to resolve all public disputes privately and to reduce all actions to mere intentionality.

The trouble, then, is that this ethical framework travels. There are thus difficult questions to ask. After all, does this paradigm merely stay within the church? If evangelicalism as understood according to the rubrics of the 1950s founding fathers (Carl Henry, Harold Ockenga, Charles Fuller, Billy Graham, etc.) constitutes a biblical intervention into public discourse, then is this framework the contribution of evangelicals to the social and political arena? Are these evangelicals seeking to teach a ‘post-Christian world’ that Christian ethics begins and ends with privatization? Indeed, the point of A Call to Resurgence is, according to Tyndale House Publishers, a call for Christian unity to proclaim the Gospel to a post-Christian world. This presumably includes advancing a moral philosophy. This private consensus may well be that Gospel’s articulation. Such ideological moves that seemingly work only within the church thus have public consequences. They should be publicly interrogated for the public interest.

December 12, 2013
Contesting the Americas with Our Lady of Guadalupe
Next Post 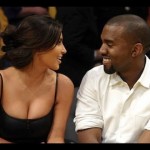 December 20, 2013 Duck Dynasty and the Corporatized State, or 'The Kimye Hermeneutic'
Recent Comments
0 | Leave a Comment
"I can't believe you would consider the theological lightweight Kilby as a proper critique of ..."
antoniodec Fiat mihi secundum verbum tuum: on ..."
""Milbank criticizes Balthasar for being apolitical in his aesthetic reflections, and I can see how ..."
antoniodec Reading Sobrino on Óscar Romero and ..."
"the word is receptive, which has nothing passive about it but could be the most ..."
antoniodec Fiat mihi secundum verbum tuum: on ..."
"One can never "go home," not in this life."
billwald I’ve found my way home: on ..."
Browse Our Archives
Related posts from Eastern Catholic Person 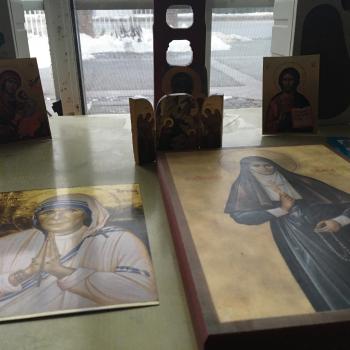 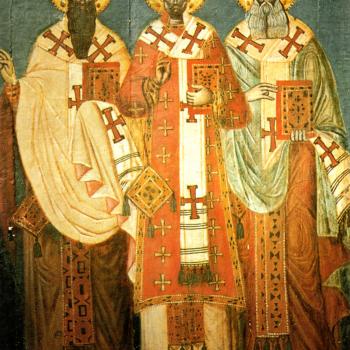 Catholic
The passion of finding just one theologian to...
Eastern Catholic Person
TRENDING AT PATHEOS Catholic