Yes to Tiananmen invocations, but no, not what you think. #OccupyCentral #CongressOccupied

July 3, 2014 by Justin Tse
0 Comments
Yes to Tiananmen invocations, but no, not what you think. #OccupyCentral #CongressOccupied July 3, 2014 Justin Tse

What I hear most about the recent democratic happenings in Hong Kong and Taiwan is that there will be blood. I suppose the recipe for blood is all there. There are students. There’s democracy. There’s Beijing. There’s an occupation. And there are reports of the People’s Liberation Army training for emergency.

The stage is set, it seems, for a second and perhaps third 6/4 incident. For those who need to be caught up, there was a student movement in 1989 in which students in Beijing occupied the city’s central public square, Tiananmen Square, for just under two months. On 4 June 1989, the People’s Liberation Army came in to clear the square, resulting in a bloodbath especially outside of the square and the production of a ‘most-wanted list’ that included many democratic activists that are still working today: Wu’erkaixi, Wang Dan, Feng Congde.

As the incident went down in a popular song released afterward, 6/4 has been known as the ‘wound of history,’ a massacre that for all of Beijing’s attempts to deny and erase it from the public record, remains a trauma for which redress is necessary.

However, as public sociologist Craig Calhoun has observed, this very trauma has also resulted in the Tiananmen student movement only being remembered as a massacre, and nothing more. And thus, as democratic activists occupied Taiwan’s Legislative and Executive Yuan in March and as the movement Occupy Central with Love and Peace has been planned in Hong Kong, the images that comes into most people’s minds are pictures like the classic shot of ‘Tank Man’ stopping the PLA’s armies with his very body, as well as the contorted agony on the faces of deceased students gathered into piles with their singed bicycles.

‘There will be blood,’ I am often told, which is why in turn both Taiwan’s and Hong Kong’s recent democratic movements have sometimes been decried as irresponsible, in a sense asking for the violence that they know will happen.

The only problem with this account of the Tiananmen tradition is that it’s a very truncated understanding of what went down from 15 April to 4 June 1989 in Beijing. I’m not denying that there very well may be violence — I mean, if you don’t call water cannons at the students in Taiwan and police hitting protesters’ pressure points in the recent Chater Road occupation in Hong Kong, I’m not sure what violence is, then — but to only invoke the truncated account of Tiananmen as only a massacre is to do a profound disservice in representing the current democratic movements.

Here’s what Tiananmen 1989 was about: it was a protest for real democracy over against the market reforms that only brought China ‘neoliberalism with Chinese characteristics.’

As I said in yesterday’s post, it’s very important to understand this fundamental point about the Hong Kong and Taiwan protests. The Taiwan occupations revolved around the issue of economic integration between Taiwan and the People’s Republic of China, a policy that was squeezed through Taiwan’s government in a political effort to cement market conveniences. The denunciations of Occupy Central in Hong Kong decry not only the putative illegality of the organizers’ actions, but more importantly that their civil disobedience acts will cause market disruptions in the Central business district. The last thing on these demonstrators’ minds is communism as an ideology, per se; after all, how on earth is market fundamentalism a communist ideology, apart from the fact that the agenda is that it be orchestrated by a ruling class known as the Chinese Communist Party (CCP)? While my colleague Kean Fan Lim has written brilliantly about the possible long game of the CCP in using market inequalities to finally bring about an anti-capitalist revolution that will usher in true communism, my sense is that the democratic protestors are likely more interested in what the CCP is doing now, which is to increase market integration in Greater China while propagating a ‘harmonious society’ ideology that keeps the social peace for economic conveniences.

They are protesting this because they see correctly that what is in fact playing out is not real democracy. That’s because a ‘harmonious society’ is not the same thing as a deliberative public sphere. (See this piece, by the way, for a fascinating speculative take on Hollywood and the ‘harmonious society.’

I keep on mentioning Craig Calhoun’s book on the Tiananmen student movement because it’s a foundational text, believe it or not, in studies of democratic public spheres. That’s what I work on as an academic. When I started my PhD in 2009, I had no idea that Tiananmen would be so central to what I do. I merely set out to figure out what, if anything, Cantonese-speaking Protestants were doing in the public sphere. Four years and 644 pages later, I had wizened up to the academic reality that if I was actually going to use the word ‘public sphere’ in my studies, I had better have some familiarity with that literature. Because I was studying Cantonese Protestants, I figured the best way to get into this stuff was through the ‘religion and the public sphere’ angle. I had no idea what I was in for. I learned, for example, that the gender studies theorist Judith Butler of Gender Trouble notoriety was wrestling as importantly with secularization theory as Charles Taylor, José Casanova, and Talal Asad. I discovered that critical theorist Jürgen Habermas — arguably the guy who gave us the word ‘public sphere’ — was really into religion these days, having even debated the pope emeritus on the question. I found out that the guy who conducted much of the Social Science Research Council’s emerging conversations on religion and secular publics, Craig Calhoun, was also the guy who made Habermas a household name in American academia in the 1990s.

And I found out that one of the ways that Calhoun did that was through that book on Tiananmen.

In other words, not only did I find my Cantonese Protestant participants deeply indebted to Tiananmen for their own democratic awakening, but I found more importantly that Tiananmen was becoming a core element of my own theoretical framework on how to conceptualize publics.

Calhoun’s central thesis is that the Tiananmen student protests were an organic public sphere constantly responding to happenings on the ground, yet deeply rooted in a historical Chinese sensibility of dissent. This is huge because it gives an account of the publics that the Beijing students were trying to construct. Far from the entire affair being a master-planned event, each of the activities that took place in Tiananmen Square took place in response to concrete political events, beginning with the death of Hu Yaobang, a dissenting party leader who had been ousted in the two years before his death. From the hunger strike to the meeting with Premier Li Peng to the erection of the Goddess of Democracy, the students didn’t plan their public activities; they instead responded to the actions of the government, matching blow with blow. These responses in turn were rooted in a historic Chinese tradition of dissent, mostly through the literary arts, invoking the tradition of the May Fourth Movement in 1919, which had galvanized protests in Tiananmen Square as well for national democratization as a Chinese societal good. For those who might object that the May Fourth Movement sought to eliminate ‘Chineseness,’ the reality is that it sought to redefine ‘Chineseness’ as democratic and tolerant of dissent, which is ‘Chinese’ because Chineseness, especially in relation to the ‘nation,’ is always a category under construction.

And yet there’s a big picture to all of this. In 1978, the new Party Chairman Deng Xiaoping had reversed decades of Maoist policy by declaring China to have modernized. The new ideology of the day was not Mao’s ‘peasant revolution,’ but what was termed ‘market socialism,’ or what David Harvey calls ‘neoliberalism with Chinese characteristics.’ While Deng successfully re-linked China to the global economy (whereas Mao had sought to de-link it), the material successes were distributed unevenly, prompting the rise of democratic movements and pro-democracy intellectual publications since the early 1980s that sought to understand whether these market gains could be more evenly distributed to the people. For all of the talk about the central command of the economy, did the people actually have a voice in how the political economy was run? Could they deliberate about it? Could their public deliberations have an actual political effect on the government? Could the government tolerate their dissent and incorporate their multiple voices into the operations of the state?

What the students wanted, in other words, was a deliberative democracy that tolerated dissent. They were in turn shut down because they were inconvenient to a market socialist political economy

What I’m saying, then, is that the organizers of #CongressOccupied in Taiwan and Occupy Central in Hong Kong are right to invoke the Tiananmen legacy. But by doing that, they are not simply invoking a massacre. What they are instead saying is that there is a validly Chinese tradition around dissent and the public sphere that they would like to see realized in a polity.

The action that we outside of Hong Kong must take is not only to ‘support’ them, as if their efforts depended on our support and help. What is happening is nothing short of an attempt to invoke both Tiananmen and the May Fourth Movement to construct new public spheres in Greater China. If Calhoun’s text — and I would argue that it should be the guiding textbook to understand these contemporary movements — is to be taken seriously, it is we who must learn from them. 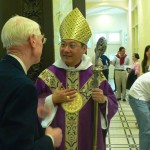 July 8, 2014 Chinglicans in Communion: in defence of Occupy Central with Love and Peace
Recent Comments
0 | Leave a Comment
"I can't believe you would consider the theological lightweight Kilby as a proper critique of ..."
antoniodec Fiat mihi secundum verbum tuum: on ..."
""Milbank criticizes Balthasar for being apolitical in his aesthetic reflections, and I can see how ..."
antoniodec Reading Sobrino on Óscar Romero and ..."
"the word is receptive, which has nothing passive about it but could be the most ..."
antoniodec Fiat mihi secundum verbum tuum: on ..."
"One can never "go home," not in this life."
billwald I’ve found my way home: on ..."
Browse Our Archives
Related posts from Eastern Catholic Person