NOTE: This is a story of trauma. There are therefore traumatic details that I will give if you read on.

I suppose there are many Americans who also hear about the atomic bomb as a story of triumph, an act that saved many American lives from a land invasion of Japan. My grandfather was from Shanghai, which makes me one-quarter Shanghainese through my mom; in fact, I do know the odd Shanghainese turn of phrase and not-so-secretly love Shanghainese food a little more than the Cantonese stuff I usually talk about. From the little that I know of Grandpa’s life before he arrived penniless in Hong Kong, he grew up in the outskirts of Shanghai in a big house with servants. Not only does he remember his father being married to his mother, but he recalled that there was a Eurasian woman who hung around the house and occasionally took him into the city that he had to call ‘Miss.’

All of this was taken away – first by the invading imperial Japanese army, then by the Communists. My grandfather was not around to see his parents reduced from aristocracy to scrubbing toilets in humiliation by the Communist liberators (no one really knows what happened to ‘Miss’), but he was there to see babies tossed by the Japanese and caught by their bayonets.

My grandfather loved to tell stories – in fact, I owe my knowledge of the Chinese classics to him – so of course the Tokyo bit is an embellishment. But the point is that it was a victory, payback for what the Japanese did to him and those babies and the rest of China (I was unaware until much later of how big the Greater East Asian Co-Prosperity Sphere really was).

It would be glib of me, I think, to point out that the anniversary of the bombing of Hiroshima takes place on the Feast of the Transfiguration; in fact, I had this pointed out to me when I visited the Episcopal Cathedral in Portland on last year’s August 6. Given my grandfather’s story, it is also impossible for me to reflect dispassionately on the bombings; it is perhaps more appropriately to write through how I came to let go of my grandfather’s hate.

I did not encounter the notion that using the atomic bomb presented an ethical dilemma until I attended Catholic school. I remember how it suddenly dawned on me that bombing Hiroshima and Nagasaki may not have been moral. I was a sophomore when 9/11 happened, and the talk of war – even of instating the draft – was on everyone’s lips. I remember my French teacher suddenly at the beginning of class speaking in English in frustration after Bush’s 2002 State of the Union about how labeling Iraq, Iran, and North Korea the ‘axis of evil’ was the height of stupidity. When I was a junior, I took AP US History at the same time that the lead-up to the 2003 Iraq War was happening, and I remember saying to my friend – who later joined the Air Force – that to my own surprise, I might be turning anti-war. He replied, Yeah, and I’m pro-war.

One of the scary things about the claim that Saddam might have had weapons of mass destruction was that, among other things, he’d be able to do to us what we once did to the Japanese. It’s what made a good deal of the evangelicals I was around – both Chinese and white Americans – quite supportive of this war. What if he has weapons of mass destruction? they opined. Do we want to take that chance? It bears remembering after the passage of more than a decade that much of the opining during that time was just as speculative as we now know it was. Besides, the justification was, Desert Storm was over so quickly; we could finish the job quick and dirty there too. Many of my friends and family were therefore quite excited when the first ‘bunker busters’ were dropped on Baghdad; with all the crowds there cheering, ‘Thank you, America,’ and the American soldier conducting Iraqi children singing ‘Jesus, Name Above All Names’ with his AK-47, it would truly be over soon.

Nervously, I had my doubts. My teachers at the Catholic school had, after all, taught me to use a word called ‘dehumanization.’ Dehumanization, they said, was when you stop seeing someone as a person and start seeing them as an object, a thing. It occurred to me that just as there were persons in Shanghai when it was invaded and New York on 9/11, there were also persons that were incinerated by those bunker busters. When it was put to us first in the moral theology class, and then in AP US History, that the use of the atomic bomb may have been morally dubious, it occurred to me also that the persons in Hiroshima and Nagasaki were not the same people who shattered my grandfather’s life in Shanghai. Hiroshima and Nagasaki, like Shanghai, New York, and Baghdad, are cities. I too lived in a city, or at least a suburb of a few in the Bay Area. It could well have been me there. That was, after all, what we were afraid of Saddam doing, whether with nuclear weapons, or chemical weapons, or biological weapons, or whatever those aluminum tubes were for.

Over a decade later, we find ourselves talking about these events as the seeds of what Pope Francis calls the ‘piecemeal third world war.’ But the Bishop of Rome, as I said when I wrote about him earlier this week, is thinking of a much longer history, one where the seeds were sown in no small part by the dropping of the bomb on Hiroshima and Nagasaki. My awakening to this war happened in 2003; perhaps my older readers will remember the Cuban Missile Crisis. Of course, this war is also being fought piecemeal, and it would have been easy for me to feel isolated from it, if only I had not become Eastern Catholic, and joined a church where our litany prayers constantly revolve around our brothers and sisters in our church and our sister sui juris churches who are being killed all the day long.

My grandfather was hardened by the violence that he experienced at the hands of Japanese aggression. Because of it, he was unable to see the persons in Hiroshima and Nagasaki as persons – bodies, faces, shining with the light of life – and though he passed on many stories of love to me, he also gave me his hate. It took many years, a lot of patience from my teachers, and the grace of the Holy Spirit to dislodge, but now I find myself in my own generation in another war where I too may have to face the temptations of my grandfather. There is indeed the ideology that makes for the perpetration of violence – the Greater East Asian Co-Prosperity Sphere, American exceptionalism (especially in its interventionist neoconservative form), fantasies of Eurasia, ISIS. But like my grandfather, there is the ideology that is generated from having been marked with violence, the hatred for the aggressor where ‘liberation,’ as Paulo Freire puts it, is nothing but wanting to be the oppressor in our own right. It would be true to say that Eastern Europe and the Middle East are the opposite side of the globe from me, but the things that hit home for me are not so different: political tensions in Hong Kong generated by an increasingly openly authoritarian government, the urgency of Asian American solidarity with Black Lives Matter with the concomitant circulation of ideologies of privatization in Asian American communities, increasing class polarization in the cities that I know and love wrought by property bubbles with no end in sight. Such, perhaps, is also the temptation for us in the Eastern Catholic Churches, to be so hardened by both the historic and contemporary aggression against us that we in turn wish the cities of our enemies – with women and children going about their everyday lives – to be bombed to smithereens. Certainly, our own hierarchs have warned us against going in this direction – see here, for example, for Bishop Borys Gudziak’s urgent call to reconciliation in light of historic reconciliations in Europe since World War II between Ukrainians and Russians even while war in Ukraine rages  – but we in the pews, whether we have pews or not, are only human. It is easy, all too easy, to defy our God-loving bishops and to close the gap between the denunciation of an aggressive ideology and the identification of persons with this ideology such that we wish also for their non-existence.

As we remember Hiroshima today along with the Feast of the Transfiguration – as we have been doing every year and will continue to do every year – let me therefore be a person, especially as we collectively find ourselves even now in the midst of a piecemeal war of aggression, misinformation, and the stirrings of new hatreds that take hold because we are fooled into thinking that they are primordial. Let me have the grace not to identify my neighbour or even my enemy with an ideology, even while I denounce aggression. Let me work, as James Baldwin once instructed his nephew with regard to Americans so blinded by an ideology of whiteness that they forgot that black lives matter, ‘with love’ to ‘force our brothers [and sisters] to see themselves as they are, to cease fleeing from reality and begin to change it.’ Save, O Lord, and have mercy on those that hate and wrong me, and make temptation for me, and let them not perish because of me, a sinner (‘Morning Prayers,’ Jordanville Prayer Book, p. 31). 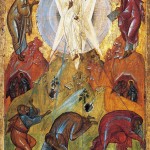 August 6, 2016
I was late to the Vigil of the Transfiguration, but I finally heard it
Next Post 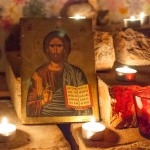 August 7, 2016 I'm getting my chrismation icons blessed!
Recent Comments
0 | Leave a Comment
"I can't believe you would consider the theological lightweight Kilby as a proper critique of ..."
antoniodec Fiat mihi secundum verbum tuum: on ..."
""Milbank criticizes Balthasar for being apolitical in his aesthetic reflections, and I can see how ..."
antoniodec Reading Sobrino on Óscar Romero and ..."
"the word is receptive, which has nothing passive about it but could be the most ..."
antoniodec Fiat mihi secundum verbum tuum: on ..."
"One can never "go home," not in this life."
billwald I’ve found my way home: on ..."
Browse Our Archives
Related posts from Eastern Catholic Person