The children of the New Eve have lost their innocence (Dormition Fast #11) August 12, 2017 Justin Tse

Patheos Explore the world's faith through different perspectives on religion and spirituality! Patheos has the views of the prevalent religions and spiritualities of the world.
Once, when I was eleven, my mother picked me up from school during lunch. I was used to having lunch with my friends at school, so I knew it was important, especially when we arrived at McDonald’s soon afterward and she made no objection to me ordering a 20-piece Chicken McNuggets (this never happened). I even had barbecue sauce with them; my mom had always made a point to get Sweet and Sour.

I found out what was up as I stuffed golden nugget after delicious golden nugget into my mouth. Do you know what an affair is? my mom asked me. I nodded, mid-bite, completely disinterested; what, after all, could be so interesting about a business transaction?

Well, my mom said, this is about your friend Justin. My ears perked up. Justin from church was a very important friend to me; it was because he was getting baptized two years before that I also got baptized, at the ripe old age of nine, which is young for people who don’t baptize babies. We not only had the same name, but also the same baptismal day. After we had been baptized, and probably because we were so cute, the church had changed the minimum age to twelve.

My mom continued: Early this morning, Justin’s mom picked him up from school and drove him all the way down to Southern California. Her husband went into her closet and found that all of her clothes were missing. Then he learned that she had served him divorce papers that had taken effect because she had delayed sending them to him. In Southern California, they united with one of the pastors at our church. She had been having an affair with him. My eyes got about that big. Justin was gone, taken by his mom. This was some crazy business transaction indeed.

Over the next week, small groups of about ten to fifteen people came nightly to our house. They’d arrive like normal people, and my mom would shoo my sister and me upstairs. The first night, I asked my mom why these aunties and uncles were here, and she whispered, It’s because we have to tell them about the affair. Within five minutes, these people that I knew as the adults were screaming like wild animals. After a little more than an hour, they’d leave, most with tears in their eyes. That was some reaction to this business transaction, I thought.

A year later, I was watching my favourite lawyer show, Matlock. There was a scene where a young man runs up to Andy Griffith sitting on his porch and says, Just because my mom was having an affair with that guy doesn’t mean she killed him! Not having heard that euphemism for extramarital copulation before, I chuckled to myself. Then I sat up. So that’s what Justin’s mom and the pastor had: an affair.

I learned later on why my dad felt that he had to have these small group screaming meetings. It turned out that the week before, the senior pastor of the church had arrived at our home. He had sobbed his face off – the pastor who had the affair could have been considered his protégé – and he had recounted to my parents that he had gone down to Southern California to beg him to come home. His protégé had replied that he’d get out a shotgun and shoot him for trespassing next time he saw him. In desperation, the old man had turned to my dad, the bivocational unpaid pastor of the small Cantonese congregation that met in this Mandarin-speaking church, and said that he’d have to handle the fallout for the whole church. Not knowing what to do, my dad had called up another prominent pastor in the San Francisco Bay Area for advice; that pastor, as providence would have it, had walked in on some of his church staff members copulating in the office and had had to handle that situation at that church. It was he who said that the rest of the church needed to know, but a bomb couldn’t just be dropped onto them – hence the small group sessions. The screaming eventually wore my dad out; suddenly, our family was all stuffed into a car – I remember this because I had been working on a project for my music history class on Vivaldi, and all the Vivaldi books had to be quickly packed – and we were driving down Highway 101 to Morro Bay, where my dad had rented a vacation home on the fly just to get away from it all. My dad was unusually quiet; he went out every day to the beach to look at the water, and one night, he came back to the house and cooked ten pounds of shrimp while he consumed two bottles of wine. The next day, we all had diarrhea.

When my dad later wrote his Doctor of Ministry dissertation on pastoral sexual misconduct in Chinese evangelical churches (and you thought Asians were asexual), he learned that there had been at least three major public sex scandals to rock Chinese evangelicalism in the Bay Area, our church’s and that other guy’s office copulation incident included. The other one had involved a Christian school based at a Chinese church, where a very authoritarian senior pastor had had a habit of inviting some of the girls from the high school to his office and feeling them up – he had finally gotten caught and fled from the law. In my own dissertation much later on, I suggested that these incidents also resulted in the restructuring of more than one Chinese evangelical church in Bay Area to adopt structural models where power was shared instead of concentrated in one person; some churches also became interested in the norms of business ethics and corporate best practices with emphases on integrity and accountability.

I think it’s fair comment to say that Christians across the communions – Protestant, Catholic, Orthodox – are all supposed to have lost their innocence about this stuff by now, at least the ones who are honest or have been made to be honest by their circumstances about their churches. To be honest, our family felt a little bit bad for the Latin Church when their big sex abuse crisis hit in 2002; not only did we feel sorry for the people affected by it, but we also said to ourselves that at least now we know that those noble-sounding priests who are not supposed to have sex are just human beings after all. In happy ignorance of the fullness of the Latin tradition at the time, one of us even commented on the spandex-wearing liturgical dancers at our high school masses: it seemed like a miracle that the priest up front would not be tempted as the communion elements were twirled up to the altar.

But it’s not just the Latin Church, or the Bay Area Chinese evangelical churches of my childhood, for that matter. In 2013, Boz Tchividjian, the founder of Godly Response in the Christian Environment (G.R.A.C.E.) and evangelist Billy Graham’s grandson, declared that however bad the Latin Church’s scandals were, they paled in comparison to the skeletons hiding in evangelical closets. These stories make my childhood stories look tame – at least I learned about a consensual affair, whereas Tchividjian’s cases, mirroring the ones from the Latin Church that were said to have made Cardinal Ratzinger visibly flinch in the offices of the Congregation of the Doctrine of the Faith when he heard them, include stories of sexual assault and child molestation. In the meantime, many a big-name Protestant institutional leaders ranging the ideological gamut from the Jesus Movement to the charismatics to the New Calvinists to the health-and-wealth to the seeker-sensitive have fallen, with sordid scandals that go from the consensual to the non to somewhere in between. As for the Orthodox, Rod Dreher, who had left the Latin Church for the Orthodox Church in America (OCA) over the sex abuse scandal, wrote in 2015 that he had ‘ugly news from my communion,’ with a series of decades-old cases of abuse in the OCA reaching up to the episcopal level – and this too was just the tip of the iceberg. Across our schisms we are united by scandal; together, we as Christians in many ways deserve our dubious reputation of having contributed to the election of Donald Trump, sleazeball womanizer-in-chief.

And yet we, across our communions, are the people who each claim to make the Lord present in our midst – in the Word, on our praises, in the icons, in bread and wine. One of the reasons the Most Holy Theotokos is said to have gone the furthest in the pilgrim life of the Church is that she typifies what it means to bear G-d into the world. But while she is All-Holy and Ever-Virgin, we have all lost our innocence, whether as perpetrators, victims, bystanders, gossipers, or purposefully ignorant.

There is a gap, then, between who we are supposed to be as the people of G-d and who we are; we may be children of the New Eve, but we are really more like the old one. Holy Augustine of Hippo’s interpretation of the wheat and the tares is of little comfort here; after all, the various claims of contemporary Christians for moral values and sexual integrity make us out to be a bit more like the Donatists opposed by Augustine, the ones who claimed to have formed a pure church unlike those Catholic Christians who seem to grant forgiveness to everyone like candy, which means that it is closer to the truth to say that many are actually failed Donatists.

But the truth of our predicament may lie in the failure of archetypes; the comparison of the people of G-d to the Theotokos has its limits. The Theotokos is a person in her own right, and as she sees her children rising and falling in her Son’s name, a sword pierces her heart as well. I have asked the Theotokos from time to time what she thinks of all of this; each time there is silence, but a palpable one, like she is there, pondering as she grieves from deep within herself over her children.

She gives me no answer, which is typical, but the question of what she thinks is a theological one too. In the presence of the Theotokos, and in the light of such embodied scandals, perhaps a perverse theology of the body can be done. The experience of the body, Pope St John Paul II said, speaks in its own language of G-d. But of what gods do the bodily perversions of our churches tell? 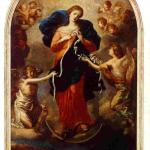 August 11, 2017
The private consensus is unraveling (Dormition Fast #10)
Next Post 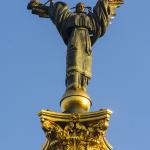 August 14, 2017 The conversion of the goddesses (Dormition Fast #12)
Recent Comments
0 | Leave a Comment
Browse Our Archives
get the latest from
Eastern Catholic Person
Sign up for our newsletter
POPULAR AT PATHEOS Catholic
1