Showing the Beauty of Virtue: Don Bosco’s Legacy of Care

In a week when the scandal of clerical abuse of young people is again in the headlines, it’s particularly important to invoke the prayers of St John Bosco, patron of youth, whom the Church remembers today. And it’s especially important for people like me, who raised some hackles this week by calling for more accountability on the part of bishops who enabled and perpetuated the scandal, to acknowledge the Church’s much longer and larger legacy of ransoming children from abuse and caring for them as Jesus intended his shepherds to do.

Don Bosco, as he is popularly known, is a big part of that legacy, and his spiritual heirs—the Salesians and the Daughters of Mary, Help of Christians—continue it in our time. Giovanni Bosco, born into an Italian peasant family in 1815, was both a mystical dreamer and a ruggedly practical problem solver. From an early age, he reached out to other poor boys like himself, seeking to share with them the joy and optimism of the faith his mother, Margharita, instilled in her children. Young John used to entertain the gangs of neighborhood kids with juggling and magic tricks (the reason he is also the patron of illusionists and stage magicians), prefaced and followed by prayer.

In an era when no one spared the rod, and wayward children were regularly controlled by beatings and incarceration, John knew there had to be a better way. At the age of nine, he wrote, he dreamed of an imposing figure who imparted to him the wisdom that would guide his life’s mission: “You will have to win these friends of yours not with blows, but with gentleness and kindness. So begin right now to show them that sin is ugly and virtue beautiful.”

A parish priest helped John fulfill his vocation to the priesthood, and he began his ministry as chaplain to an orphanage. Older street kids—today, we’d call them kids who aged out of the system—would return to the orphanage for catechism classes, but weren’t welcome because of their rowdiness. Don Bosco took them on, combining catechesis with games and food and music, meeting the kids where they were. When they got too loud for the orphanage, he found them a new meeting place, and named it an Oratory after the example of the earlier laughing patron saint of youth, Philip Neri. John’s mother moved in with him, and the Oratory became a home for orphaned street kids.

Eventually, others were drawn to John’s mission. He formed a religious congregation of men named after St Francis de Sales, whose practicality spirituality was deeply influential. Later, he helped a co-worker, Mary Mazzarello, found the Daughters of Mary, Help of Christians, to continue the Salesian outreach to young girls and to stuff schools and orphanages.

He faced opposition from more traditional clergy and from government authorities who thought Don Bosco’s pack of happily praying and playing poor kids looked just a little too much like a revolutionary mob. But he kept on, and soon Salesians were reaching out to young people across Europe.

John also dreamed (literally) of a missionary role for the Salesians, and he saw his goals fulfilled as Salesians received permission to establish mission efforts in North and South America. One of his dreams, in which he saw a futuristic city rising on the shores of a Latin American lake “between 15 and 20 degrees latitude,” is considered by the Brazilian people to have been a prophecy of the building of their capital city, Brasilia—on the shores of Lake Paranoa, at those compass points. The first masonry building in Brasilia was the Sanctuary of Don Bosco, completed in 1957.

In the United States, as throughout the world, the Salesians and the Daughters have sheltered orphans, redeemed street kids and runaways from lives of abuse and gang violence, and provided vocational and technical education programs that give young people a chance to move out of poverty into productive employment.

I have seen one remarkable example of Don Bosco’s legacy in person. In 1985 I went to Bogota, Colombia, with a film crew to produce a fundraising documentary on the Salesians’ ministry with the gamines, the “children of the streets.” We listened to the kids themselves tell their stories—heartbreaking accounts of parental abandonment, sexual and physical abuse, poverty. We went out on the streets at night to see how the children lived—forming gangs more loyal than family, making their way by stealing or prostituting themselves, sniffing lung-rotting glue (the adhesive used in making cheap sneakers) or gasoline to stave off the gnawing hunger. I met a 5-year-old boy in a ragged Michael Jackson Tshirt who begged me to take him home while at the same time attempting to steal my watch; “too cheap,” he grinned, after realizing I’d been warned against bling and was wearing plastic. “If no one helps,” we were told by one young man who had been on the streets most of his life, “by 18 years old we are either in prison or dead.”

And then I met the children who were helped, by an innovative program developed by Italian Salesian Fr Javier de Nicolo. Having been frustrated by traditional attempts to reach out to the gamines—they’re like pets gone feral, who cannot trust and who prefer the horrors of street life with their “families” to surrendering their freedom in institutional settings—Padre Javier took a leaf from Don Bosco and met the kids where they were. He spent nights on the street with them, bringing food and medicine when asked but never insisting or judging. Gradually, he opened El Patio—a drop-in center where kids could shower, eat, play, even pray. Over time, and with the help of other Salesians and lay helpers, Padre Nicolo established more stable alternatives—schools, a working farm, job training centers, a house where girls who had been sexually trafficked from their toddler years could learn to become kids again, cuddling rag dolls and being tucked into safe beds. He fought hard against the Colombian government’s attempt to cover up the problem of the gamines by disappearing them, either by rounding them up and jailing them with no trials, or by sending death squads to slaughter them.

No child was ever forced to come into Padre Javier’s program. As with any rite of initiation, they were admitted only when they asked, when the call of health and wholeness and life was stronger than the attraction of the streets. As with neophytes, they donned new clothing and burned their street rags as a sign of new life.  Padre Javier’s network of outreach, called Bosconia, goes on, and now serves as a model for similar programs in cities around the world.

I need to remember, this week, those many, many thousands—millions, over the centuries—of children saved from abuse by good priests, good sisters, good teachers working in Christ’s name. I am not foolish enough to claim that no child was ever abused under the care of the Salesians, or any other order or Church group or individual working with young people—but I need to fight, even in myself, the aftertaste of scandal that makes me suspect all patrons of youth, everywhere, of evil motivation.

We have been shown the ugliness of evil. Let us now remember to look for, and thank, those who show us the beauty of virtue. St John Bosco, pray for us! 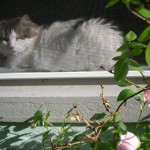 January 29, 2013
The Cat & The Cardinal: Assigning Moral Culpability When the Will Is Ill
Next Post

Catholic
You Can Lead a Beggar to Bread: Pope...
Egregious Twaddle
TRENDING AT PATHEOS Catholic