SINNERS WHO DO GREAT THINGS

SINNERS WHO DO GREAT THINGS May 24, 2019 Monsignor Eric Barr, STL 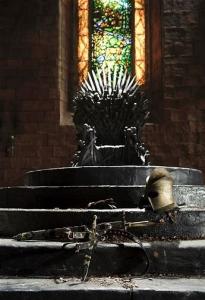 And no one lived happily ever after.  That’s what I got out of eight seasons of Game of Thrones–that awful parable for our time.  It’s a storyline with no heroes, no hope, and the constant, unremitting triumph of death and evil.  Humans defined only as sinners.  But how surprisingly appropriate for our times.  In this millennium, evil conquers everything.

Know how I know this?  The New York Yankees cast the soul of Kate Smith into hell and won’t let her voice be heard singing “God Bless America” at their home baseball games.  Why?  Apparently to some, she was racially insensitive decades ago, according to our morals now.  Mayor Pete Buttigieg, running for President, thinks the name of Thomas Jefferson should be sand blasted off every school and monument named after the former president.  He believes Jefferson’s eighteenth century morals which permitted him to own slaves can’t past muster today.  Then there are some of our bishops who are scraping off the names of their predecessors from every school and diocesan building because–wait for it–they didn’t handle the issue of sexual abuse as appropriately as our bishops think they should have done.

Every sin, no matter how great or small, seems to wipe out any good that a person has ever accomplished.  This is certainly news to God who, unless I am misinformed, still lets people know that Satan was once Lucifer, the most brilliant, beautiful and bodacious angel ever to have existed even though he ultimately betrayed God and now spends his days in Hades.  Yet God still considers him one of his greatest creations.  If we don’t appreciate the fallen angel’s original goodness, we can’t comprehend how foolish his embrace of evil.

We know better than God. In fact, our world thinks God is rather irrelevant since if he really existed he wouldn’t allow evil.  Whenever we are particularly bothered by someone’s bad deeds, we get together a mob and destroy anything good that person did and the memory of the person who did it.  Let’s think of some bad hombres besides Confederate generals.  How about one modern and one ancient.

I’ve never liked Michael Jackson.  Hated his music, videos and voice.  Looks like I’m in a good place with the world with this belief.  Michael just may be a pedophile and guilty of some pretty heinous stuff.  Hollywood is dragging its feet on coming to this conclusion, but enough people have made up their minds that some music moguls, radio stations, etc. are banning his music and never mentioning his name. The King of Pop Who?  Like I said, I can’t stand him.  But I’m not stupid.  He was a genius.  His music was stellar, his dancing innovative beyond belief, his videos epic.  But I’m told all that doesn’t count, because Michael Jackson also seems to be a sinner par excellence.

Then there’s Caravaggio who lived about 1600 A. D.  Truly a disreputable person.  He was a murderer and nobody ever has said anything positive about his personality.  Just a sketchy kind of guy, but a major painter for the ages.  He is perhaps the most popular artist in people’s opinions today.  Thousands line up for hours to see this dead painter’s works.  He died lost and alone, but his masterpieces of art have allowed millions to see beyond this world and touch the face of God.  But I guess that doesn’t count either.  Because he did evil things.

Transcending A Sinner’s Own Darkness

Here’s why the world is wrong to think that way.  Hint:  Evil isn’t more powerful than good.  In fact, evil is just a response to good, and a bad one at that.  In the end, there is only good; there is only God.  As Sister Jean Marie, RSM, my grade school principal, taught me, God doesn’t make trash.  Whatever choices Caravaggio made to darken his soul, when he painted, he communicated with God, and for a moment God lifted up that man to create something exquisitely beautiful.  When the artist allowed God to act within him, Caravaggio transcended his own darkness and became the human being he was meant to be.

I’d like to think that happened to Michael Jackson too, who often appeared a lost soul except when he sang or danced and created music that will never die.  Nobody really thinks Kate Smith was evil.  To silence her voice just seems petty.  And the noble Thomas Jefferson transcended his own human frailties when he wrote of freedom and helped create the greatest democratic republic that ever existed. I don’t know about the Confederate generals who sold their souls to the South, or the bishops who for so many years have mishandled the sexual abuse crisis.  I only know they were and are as flawed and as much of a mixture of good and evil as the rest of us. Nobody excuses anyone’s evil deeds but are they the sole measure of one’s worth?

Do we have to extinguish the individual lights of humanity because they don’t shine as brightly as we think they should?  Should we taint the good things individuals do when we discover people’s sinfulness?  Must we use their foibles, their weaknesses, their bad decisions to elevate the darkness of evil in this world to such an extent that goodness disappears from the awareness of humanity?  We have become such a people of despair.  We’ve forgotten that the good things we flawed humans do create the thin places in reality where God communicates with us.  The communication that happens between God and individuals in these thin places lets us know that we are supposed to walk with angels, not stay stuck in the muck of our own failings.

Judging Only the Bad In Humanity

Do you remember the Jewish legend of the golem?  A rabbi created a semblance of a human being from the mud and mire.  But it was a monster, because it had no soul, because it was made of darkness not light.  Whenever we raise our sinfulness, the horrors that humans can do, to supersede any goodness we create, we forfeit our humanity.  In the legend, when the golem was defeated, it became mud once again.  The more we seek to treat the sinners among us as golems–things to be wiped away like dust in the wind–the less human all of us will be.  If that happens, we’ll never touch God again, and beauty will be gone, like our humanity, from this world.

Suffice it to say, the credible allegations fit my above article well.  Mr. Garrow’s article was rejected by the Washington Post and The Atlantic and few in the United States Press are willing to address the issue.  There does seem to be some truth here and so the question has to be raised if the Rev. King’s sinfulness obviates his great success in Civil Rights.  Can he still be an icon?  Catholicism sees all as sinners.  If we accept the reality of evil in us, must we not also accept the good?

June 6, 2019 D-DAY: THE FADING GLORY OF VALOR
Recent Comments
5 Comments | Leave a Comment
Browse Our Archives
get the latest from
Thin Places
Sign up for our newsletter
POPULAR AT PATHEOS Catholic
1