RACISM OR TRUTH IN BALTIMORE? 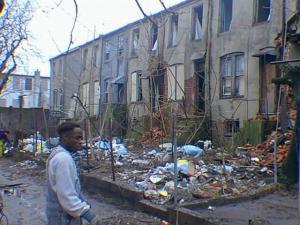 Baltimore ecumenical leaders including Archbishop Lori, responded to President Trump’s tweets on the rat infested neighborhoods of the city.  I always get embarrassed when my fellow clergy confuse people with problems.  The dignity of poor people in Baltimore is not in question.  Their living conditions are. President Trump and many other democratic officials through the years have been right to criticize the abhorrent squalid sections of the city.  They are rat infested and similar to what one would find in the third world.  Billions of dollars have gone to fix the problem but only politicians and scammers have benefitted.  How tragic.  This isn’t about racism.  It’s about corruption and incompetence.  Baltimore doesn’t get a participation trophy for wanting things to be better.  And smarmy religious sentiment won’t fix things either.  The religious leaders should read St. Ambrose’s letter “ON NABOTH” to learn how to write a letter about social justice.  What they have given us is pious pablum, which, if it was food, even the rats of Baltimore would vomit from their mouths.

From the ecumenical leaders of Baltimore:

To the President of the United States:

As the judicatory heads of a number of Christian denominations in Maryland, we want you to know that many of our churches pray for you by name every Sunday in our worship services. In one of the prayer books that is commonly used, we find this prayer for you and civic leaders:

“Grant to the President of the United States…and all in authority, wisdom and strength to know and to do thy will. Fill them with the love of truth and righteousness, and make them ever mindful of their calling to serve this people in thy fear.” (Book of Common Prayer, page 820)

Recently, much to our dismay and profound sadness, you publicly slurred our beloved City of Baltimore in a tweet. We will not dignify the slur by repeating it. It was horrible, demeaning and beneath the dignity of a political leader who should be encouraging us all to strive and work for a more civil, just and compassionate society.

It is all too easy to look for scapegoats and fault others for longstanding and systemic problems that beset every community. Cities, which bring together diverse races, languages, cultures, economic and social conditions, are frequent targets for those who cannot – or will not – see their beauty through the eyes of God and in their inhabitants.

To their detractors, cities are seen only through the lens of social evils such as poverty, crime, violence and racism. To God, however, cities are seen primarily as vessels of hope, lights of God’s reign, and opportunities for living in blessed community.

In the Holy Scriptures, the prophet Jeremiah uplifted his people who were in despair:

Thus says the Lord of hosts…Seek the welfare of the city where I have sent you into exile, and pray to the Lord on its behalf, for in its welfare you will find your welfare….Do not let the prophets and the diviners who are among you deceive you, and do not listen to the dreams that they dream, for it is a lie that they are prophesying to you in my name; I did not send them, says the Lord. (Jeremiah 29: 7-9)

Great leaders like Jeremiah had a compelling vision for their people, and they knew how to bring diverse people together around that vision. Our congregations have a similar vision of health and prosperity for Baltimore, and they are working courageously and effectively to build up the city by their actions – not tearing it down by their words.

In Baltimore, people of faith are…
…teaching children to read, study, play and grow in safe environments.

…reaching out to high school students in programs that keep them off the streets and expand their opportunities.
…saving the lives of those addicted by opioids, alcohol and other drugs.
…reclaiming abandoned buildings for housing and other community needs.
…taking real steps to reduce gun violence and promote social cohesion.
…helping recent immigrants and refugees to settle into and thrive in their new environments.
…feeding, clothing and housing those who have no where else to turn and no one else to help them.
…planting trees, growing gardens, and cleaning up streets and waterways to protect God’s good earth from pollution.

Everyday, they are demonstrating their commitment to loving God and their neighbors as themselves. Our people are showing us all how to live, and how to lead. We invite you to come visit us in Baltimore; see us in action, and see how our communities survive and even thrive in the face of adversity. We are asking for your help – not tweets of denunciation.

Today, more than ever, we need visionary leaders like Jeremiah. In an open society of honest disagreements and political differences, it’s especially imperative that leaders do not insult, demean, dehumanize and divide people and communities. Good leaders lift up, call people together, and bring out the best in them. Slamming individuals and whole communities is not leadership; it’s regression – for everybody. Leaders lead.

Mr. President, as religious leaders we implore you: in the name of all that is good, healthy and decent, stop putting people down. Enough of the harmful rhetoric that angers and discourages the people and communities you are called to serve – more than you know.

The Ecumenical Leaders’ Group of Maryland

The Right Rev. Eugene Taylor Sutton
Bishop of the Episcopal Diocese of Maryland

The Most Reverend William E. Lori
Archbishop of the Archdiocese of Baltimore

The Most Reverend Denis J. Madden
Auxiliary Bishop of Baltimore
The Archdiocese of Baltimore

August 4, 2019 CHESTERTON—NOT MEDIOCRE ENOUGH TO BE BRITISH SAINT
Recent Comments
1 Comment | Leave a Comment
Browse Our Archives
get the latest updates from
Thin Places
and the Patheos
Catholic
Channel
POPULAR AT PATHEOS Catholic
1

Another Word on the Tragedy of...
Steel Magnificat
Related posts from Thin Places