CATHOLIC BELIEF IN EUCHARIST HASN’T CHANGED IN A QUARTER CENTURY 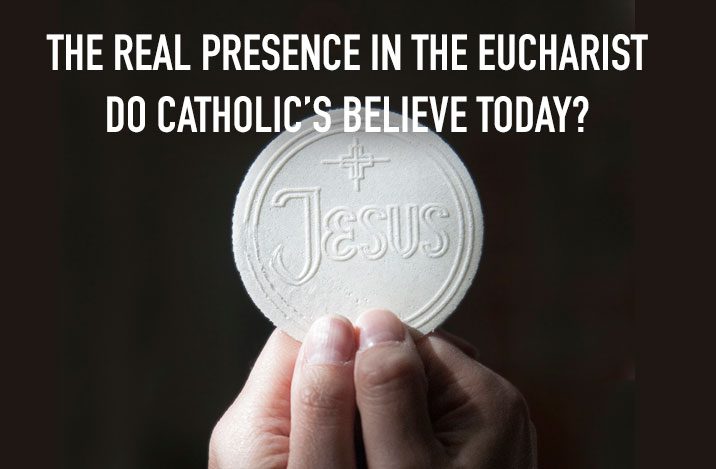 Recently, my friend Bishop Robert Barron let his righteous anger fly on his blog concerning the new Pew Research Poll showing that only one third of Catholics believed in the Real Presence of Christ in the Eucharist.  He and I were in seminary together, and he certainly deserves the title of Best Catholic Apologist.   He was right to be angry about the incredible aridity of Catholic Eucharistic belief, but he and other commentators have become incensed over this fact as if it were a new thing.  It is not.  Catholic belief in the Real Presence in America has not changed in 27 years.  Back in 1992, when Gallup took a poll on this very subject, the same percentages were discovered.  One third of Catholics believed in the Real  Presence and nearly 70% had a heretical view of the Eucharist.  I remember that poll clearly as I was working on a Eucharistic talk at the time.  I, too, was appalled–decades ago.  So this is nothing new.

The Church Has Failed In Recent Efforts To Emphasize The Eucharist

That fact  shouldn’t lessen our anger, but it should put it in context.  Despite everything we Catholic educators, pastoral leaders, and catechists have attempted, even with the introduction and implementation of the Catechism and a new translation of the Mass prayers–Catholics haven’t changed.  Most of those who profess the faith are as heretical as Berengar of Tours (who arguably caused all this mess a thousand years ago, deciding that the how of the Real Presence was more important than the fact that there truly was one), the Albigensians, and the Protestant reformers.

Nothing has happened in the last quarter of a century to lessen Catholic belief in the Eucharist.  This fight was lost in the decades of the ’60’s and ’70’s.  What’s amazing is that a third of Catholics actually still believe what the Church has always taught about the Eucharist.  That must be because God is in his heaven holding them in the palm of his hand, because it is not due to anything the Catholic leaders of the Church have done.  We are going to have to look back over sixty years to discover what really happened.  Catholics today are no less religious than a generation ago. If anger must be expressed, it should not be expressed at them.  Most have never possessed the faith they are seemingly accused of rejecting.

Why Eucharistic Doctrine Is Rejected

I’m just one priest with a theological degree and a lot of pastoral experience.  I guess that qualifies me to offer an intelligent opinion but what follows is just that–an opinion.  What do you think?

Here’s my take on why the majority of Catholics reject the Eucharistic doctrine of the Church:

First, no recognition of individual spiritual experience.  Most Catholics have difficulty articulating an experience of God in their lives.  Many think they have never had such an experience, even if they receive the Eucharist regularly.  I maintain they have had such an experience; they just don’t know how to label it.  The Church has done a poor job pointing out how to have a relationship with the Divine.  Put another way, a lot of modern Catholics would walk right by the Burning Bush, convinced God’s voice was just the whisper of the wind.

Second, the decline in Mass attendance demonstrates most clearly that there is little connection between the presence of Christ in the Eucharist and the presence of Christ in a person’s heart.  Our Catholic people are not evil.  It is inconceivable to me that the many Catholics who prefer soccer, football,sleeping and shopping to Mass are deliberately ignoring God.  Why?  Who would pass up a chance to have a heart to heart with Jesus?  Most Catholics just don’t believe that the Eucharist gives any special connection with God.

All Religions Considered The Same

Third, there has been an equivalency promoted both by those in the Church and without, that all religions are basically the same.  Want to kill the knowledge of Eucharistic Real Presence?  Then promote this idea.  The fact is, there is no other religion on earth that proposes a more intimate contact with the Divine than the Catholic Church with its doctrine of the Eucharist.  You have to love what St. Augustine proclaimed when he said that ordinary food becomes part of us but when we eat and drink the Body and Blood of our Lord, we become divinized–we are made godly.  Like I said, no other religion makes this claim.  In fact, so outrageous is our belief that the proponents of Islam would kill us for blasphemy because of our contention that we can be this close to God.

Fourth, by over-intellectualizing the “how” of Eucharistic Real Presence, we have taken all the awe out of it.  Transubstantiation is and remains the best explanation of how the bread and wine become Christ, but such an explanation without application to human experience is deadly to the soul.  In the first millennium of Christianity, the Church didn’t need to explain how the Eucharist happened; the faithful simply experienced its reality.  We need the teaching of transubstantiation to anchor our belief in faith, but we also must recognize and emphasize the experience of God we receive to anchor this teaching in our hearts.

Fifth, Church music sucks.  Forgive the vulgarism but it boldly declares the truth.  Most priests, bishops and theologians will tell you that nearly every heresy known to humanity has been incarnated in a song written in the past sixty years by a Church musician.  Never forget that seventeen hundred years ago, Arius, a priest from Egypt’s Alexandria, used music as propaganda to promote his belief that Jesus wasn’t God.  His very popular tune–number one on the Holy 100–was titled “There Was A Then When He Was Not”.  Many Christians humming that ditty apostasized, proclaiming that Jesus was just a superman, not the pre-existent Son of God.  If we want people to believe in the Real Presence, we are going to have to sing about it.

Sixth, reverence and gesture are essential, but the Traditional Mass is not in order to restore Eucharist fidelity.  Instead of finding ways of reaching the majority of the people with sacramental truth, some hold on to the notion that if we just abandoned Mass in the vernacular, our sacramental problems would be solved.  No doubt the Latin language helped instill a sense of mystery in the faithful, but it will not become the majority’s preference.  For a small minority of Catholics, there is a place for the Traditional Latin Mass, but the Novus Ordo, (Mass in the Vernacular), is here to stay for most.  So are bells, genuflections, incense, candles, vestments, the elevation at the consecration, Eucharistic adoration, Benediction and Eucharistic processions.  There are many ways to emphasize reverence toward the Blessed Sacrament that everyone can embrace without reimposing a Mass that only existed for 400 years of the Church’s 2000 year existence.

Ultimately, what is needed is a radical re-orientation of our faith community towards a transcendent Church.  That’s a Church based on the experience of Jesus Christ in the Eucharist, its belief system explained in orthodox doctrine, but its emphasis based on a relationship with the living God in this world, in our time.  I hope to flesh this out in blogs to come.

These are just a few thoughts.  Others can add to them.  But we cannot let our anger or our disappointment discourage us. If our people cannot point to an experience of God, if they do not long to meet him in a special way at least once a week, if we lose the uniqueness of our faith, then we truly will lose the fight for orthodox belief in the Real Presence of Christ.  We are not the Church without Eucharistic Presence of our Lord. It’s how we experience him and the salvation he won for us.  I long for the day when we all say again:  “I believe, Lord.  Help my unbelief.”

About
Monsignor Barr is a Roman Catholic priest of the Diocese of Rockford, Illinois. In his 35 years of priesthood, he has been pastor, principal, teacher, Vicar for Clergy and Vicar General. He is a former associate editor of a newspaper and a novelist. He speaks on Celtic Theology and Current Catholic Issues. You can read more about the author here.
Previous Post